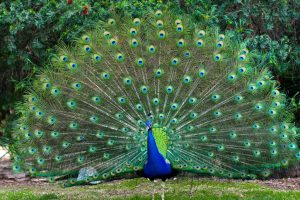 By Tony Hooker
Sound the alarm!

It’s time to alert the FBI, the CIA, the PGA, the NFL or any other acronym that you can think of!

I’m talking about Fireball the Peacock. Silhouette Stylist Cheryl Thomas brought the colorful fowl home the day after the big downtown Villa Grove fire in 2011, and he has resided comfortably amongst her brooding hens ever since.

Until last week. One evening, Cheryl saw him venture into a nearby cornfield as he’s done before, only this time was different. Unlike the other treks where he would go visit the neighbors, sometimes roosting in their tree for the night before meandering home the next day, this time Fireball didn’t come home.

According to Google, Peacocks reach sexual maturity around the age of 3, so this is Fireball’s prime time to shine. And shine he tries. The bemused Thomas reports that his amorous approaches to her hens have been met with vigorous protest, leading him to go looking for love in all the wrong places, as it has so many other males of all species of his age and maturity level. I know of a certain rotund newspaper man who used to get off work at Bradley’s at 2 a.m. and drive clear to Orland Park in hot pursuit of tail feathers in the days before he found the queen of the peafowl and tricked her into becoming his hen for life. Looking for love in too many faces, indeed.

The problem for Fireball, of course, is a lack of potential mates. Pea hens aren’t aplenty in the Fairland wilderness, and so he has taken to wandering further away from home as he gets older. It’s understandable. Love has started wars and ended them. Love has inspired everyone from the great poets like Byron and Shelley to the not so great rap artists like 2livecrew, so it’s no wonder that it has warmed Fireball’s innards. A lovelorn bull moose named Josh once courted Jessica, a Hereford cow, for 76 days before retreating into the Vermont woods, all for the sake of intimacy, so there’s a precedent here.

For her part, Cheryl remains hopeful, yet philosophical. “I’d just like some closure,” she said. “If he’s found somewhere better than here, where he got his own bags of kettle corn and frozen meal worms, I can live with it,” she said wryly, her tongue firmly in cheek.

If you happen to see a large bird, on display, give him some space, because he’s most likely speaking the universal language. Oh, and besides space, you might think about giving him a bag of meal worms. He’ll be eating out of your hands in no time.