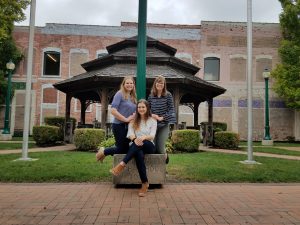 By Kayleigh Rahn
Three Douglas County students had the opportunity to dig a bit deeper into their community and learn more about their chosen fields during summer internships with the City of Tuscola.

“We knew we had enough projects to employ someone part time or take on three interns,” Alta said. “It takes time to have an intern with training and answering questions, but hopefully they are learning something and receiving feedback.”

Courtney, a TCHS graduate, is a student at Augustana where she is studying graphic design.

Throughout the summer she has provided illustration, Facebook posts, and logos. She has completed designs that will hang as canvasses in the Community Building.

One is a map of the original design of Ironhorse Golf Course. After years of hanging at the Community Building it was damaged. Courtney has worked to superimpose an aerial illustration of how the golf course looks today over the original, damaged map.

When she applied, Courtney was simply happy to find a paid internship close to home.

“I’m not sure what I expected coming in,” Courtney said, “but I know it’s been completely different than any work I’ve done before. I’ve worked in retail before but it’s been nice to be in a completely professional office surrounded by people who truly just want you to succeed. Everyone is friendly here. It’s a great environment.”

Courtney said while in school she has been pushed into modern, “weird” design challenges; however, while working for the city she has dipped into more traditional, business friendly work. With several days left before the end of her internship, Courtney is excited to take what she’s learned back to school to her instructors.

Villa Grove native Holly is studying business at Eastern Illinois University, and she has spent her summer working with TEDI director Brian Moody.

“She was worked to update the Chamber newsletter and business listings,” Alta said. “She has been able to experience various events and tackle tasks that relate to her business degree.”

Holly is a Douglas County CEO program alumnus, and Brian has played a key role in bringing the program to county students. Olson, in her intern role, has been able to give back to the program by aiding in the organization of meetings and working to kick off the 2019-2020 program.

“It’s been rewarding to be able to give back to the program that did so much to point me in the direction of my future career and my confidence,” she said.

During the program, students are asked to start an original business from scratch. Holly continues her business today.

Holly says highlights of her summer included getting to know the other interns and working  Sparks in the Park and the outdoor movie series.

Olson and Brewer have received credit hours for their internships.

Finally, Makenna Long, who will be a junior at TCHS this fall, has been working through history projects throughout the summer.

“She is our resident history research and archeology aficionado,” Alta said.

Last year, the city, spearheaded by the Tourism Department, launched a digital, interactive map on its website that allowed guests to learn about significant places around town.

Throughout the summer, Makenna has worked to create a booklet for a walking tour of downtown.

The booklet begins at the library and takes walkers on a self-guided tour of downtown using stories and history tidbits about each building.

“Makenna spent a lot of time at the (Douglas County) Museum and going through the history book to compile this information for people visiting town with tour busses,” Alta said.

Using Makenna’s information, Courtney has completed preliminary design and layout of the booklet.

“This is my first job, and it’s been a pretty good first job,” Makenna said. “I knew I wanted to work in an office setting somewhere, and I love history, so this seemed like a good fit.”

In addition to her research, Makenna has covered the city’s water payment window and has been introduced to typical office equipment she’s never used before.

“I’ve learned about customer service through working at the window, while also accomplishing my tasks for the history project,” she said.

Courtney and Makenna agreed that working for their hometown gave them the opportunity to better understand their community and the processes that local government takes within their lives.

“Everything is really done for a reason,” Courtney said.

“Decisions and a set of rules affects every role in government jobs,” Makenna added. “I really appreciate everything everyone does here.”

In the future, Alta says the walking tour booklet will hopefully be sold at the museum, an idea that has both Makenna and Courtney excited about leaving behind a memento of their summer experience.

“I’m anxious to come back and take pictures in front of the canvasses I created, and it’s exciting knowing that people will be looking at our work and it will be for our town,” Courtney said.

“Many people won’t know, but we will,” Makenna said. “Hopefully every time people look at this stuff they remember us as those crazy interns.”