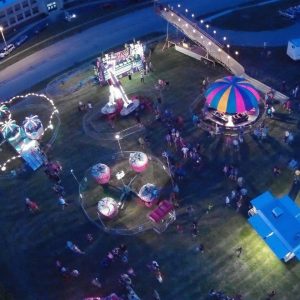 By Tony Hooker
Every year, more carnivals reach the end of their time. As operators age, they find no willing takers on the insanely long hours that their craft requires. Just this past year, three shows folded, leaving nearly 45 festivals and town fairs without a midway. For Villa Grove Ag Days, this hasn’t been a problem, because for nearly 30 years, Kent Brinkley has been bringing his carnival, Clay County Amusements to town each August. I recently caught up with Kent, and he shared his thoughts on what how he came to be a carnival man, how he sees the future, and so much more.

How long have you been involved in this business?
Twenty-seven years.

What compelled you to get into such a crazy business?
I was the president of the chamber of commerce in Flora, Ill., and I promised them that I would have a carnival for their fall festival. I couldn’t hire one, so I went out and bought two or three little rides and I did it myself, and it’s just grown from there!

What are some of the highlights of your almost three decades in the industry?
I don’t know, it’s basically just the same thing every week and every year. It’s nice to get out and meet new people. The committees we work with are all good people, but as far as any highlights, nothing really sticks out.

How about memorable ones, let’s go with that?
Well the most memorable one we had was the accident we had here in Villa Grove twenty years ago. We’ve been doing the festival here for 23 years. The only major accident we’ve had was right here, 23 years ago.

I don’t remember what happened?
A little girl fell off our slide.

Has the industry changed in the last 30 years?
Oh yes, it is more regulated by the state, for insurance and everything. A lot of people have the old carnies in their head, and it’s not like that anymore. You’ve got to be a business person to be out here.

You were telling me last night that the industry itself is undergoing a change.
The industry is going through a change. The people who have been in it for 40 or 50 years are retiring, and their kids and grandkids don’t want it, so their selling everything and closing down. We’re losing a lot of carnivals across the United States. We’ve lost three here in Illinois, and that leaves about 45 spots where carnivals, festivals and fairs are looking for amusement rides. It’s really hard to find a carnival today. You’ve got to go where the money is, and a lot of people are moving out of the littler spots and into the bigger ones, and its going to be hard for these little festivals like this to keep a carnival going.

How did your association with Villa Grove begin?
A friend of mine books circuses, and he told me that Villa Grove was looking for a carnival. Doc Dowler is the first person to hire me, he and Neal Tay. We’re trying to decide if that was 23 or 24 years ago.

You mentioned that you were on the chamber of commerce when you started this. Do you still have outside business interests?
I don’t at this time. I was in the satellite tv business back then.

How long do you see yourself doing this?
I’d like to retire! <laughs> I’m hoping to stay another five years, until I’m 65 and then retire.

Do you have anyone in line to take over?
This one (indicates son), but he’s not interested! <both laugh> My grandson tells me he wants it, but he’s only 12. The thing about it is, you give up every weekend for the summer.

Are there any changes in store for Villa Grove? Do you do ok, here?
We do alright here, but the thing about Villa Grove is that we did Sidney last week, we come down here and do Villa Grove this week, next week we’ll go up and do St. Joe and then we’ll move over and do Mansfield, and then we’ll do Mahomet, so that’s five weeks in a row and then we’ll head back south. That’s five weeks that I don’t have to put fuel in or put miles on my trucks, and they’re all pretty good little shows. St Joe and Mahomet are a little better, but they’re a little bigger, too. It works out really well for us.

I saw that you’ve gotten some new rides this year. What’s the process for going out and doing that?
There’s a company on the internet called usedrides.com. Basically, every ride in the country that’s for sale is on usedrides.com. They’ve got new rides as well as used ones and parts.

How do you decide which one is a good purchase?
What we look at is if we can load and unload a lot of people in a short amount of time. Everyone asks why we don’t have a Ferris Wheel, and with a Ferris Wheel, you have to load a seat and then turn it half way around and load another seat and it’s too slow to load and unload. For the festivals that we do, you have to be able to load and unload quickly. Price is also always a consideration. Rides like the Pirate ride cost $25,000 used. Some of those rides cost $50,000 or more, new.

Is there anything that you would like to add?
Not really, just that I always look forward to putting on a good show.