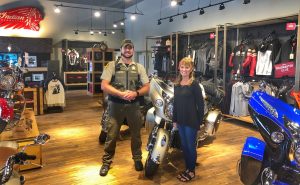 Douglas County Sheriff Joshua Blackwell and Indian Motorcycle Central Illinois have teamed up together to support Peacekeepers Inc. and the Illinois Sheriff’s Association (ISA) in upcoming fundraisers being held on July 20 and 21, in Springfield. The fundraisers, Chips for Charity and Peacekeepers Ride, are being held to support the Illinois Military Family Relief Fund (IMFRF) and an ISA administered scholarship fund for law enforcement and military families. Peacekeepers Inc. was formed in 2004 as a not for profit organization with a 501(c)3 status created to assist the men and women of law enforcement and military in the State of Illinois.

In 2013 the Peacekeepers were embraced by the ISA and an annual ride became a statewide event with multiple rides being planned and organized throughout the state. This motorcycle ride has generated hundreds of thousands of dollars for its organizations and last year the Peacekeepers awarded 15 scholarships to students of law enforcement and/or military personnel and contributed almost $10,000 additional dollars to the IMFRF.

This partnership between Sheriff Blackwell and Indian Motorcycle Central Illinois, will allow the Sheriff to participate in these fundraising events while demonstrating a sleek-new Indian

Chieftain motorcycle provided by Indian Motorcycle Central Illinois. Both the Sheriff and owners Mike & Jill Owen feel it is important to give back to their communities, and these fundraising events are a unique way to do so. Anyone interested in finding out more information or participating in either event is encouraged to visit the Peacekeepers website at https://www.peacekeepersinc.com/.