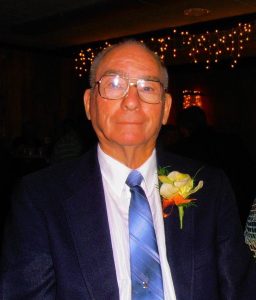 Ray graduated from Tuscola High School, has a B.S. Degree from DePauw University and took additional work toward a teaching certificate from the University of Illinois. He taught in Newman High School and Turkey Run High School. He was the Public Relations Director of Parke County REMC and has been engaged in farming. While with the REMC he served on the Parke County Inc. Board as Secretary and President, and he worked on the initial planning committees for Billie Creek Village and also Burnett Manor.

His memberships include being a 50-year member of Tuscola Lodge #332 F&AM, Tuscola Chapter Royal Arch Masons, Militia Commandery #37, and the Zorah Shrine Temple in Terre Haute. He was a member of the Rockville United Methodist Church and attended the Marshall Federated Church. He started playing trumpet in a dance band while in high school and this became a lifelong interest. He had his own band in college and some years after. He played in Shrine dance bands in Terre Haute and Ft. Myers where he also played in a Dixieland Band. He also collected toy trains.

Funeral services were Monday, July 8, 2019 at the Marshall Federated Church in Marshall, Ind., with Pastor Brian Holt officiating. A Masonic Memorial service took place prior to the funeral. Visitation was Monday, July 8 at the church. Burial took place in Bethany Cemetery East of Marshall. Barnes and Rice Funeral Home of Rockville, Ind., assisted with arrangements.