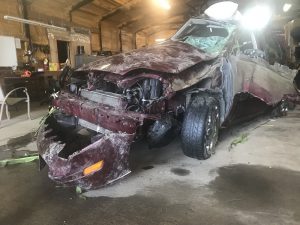 A Friday night police pursuit ended with a vehicle accident on the north edge of town, according to Tuscola police officials.

A TPD officer stopped a vehicle around 10:35 p.m. in the 300 block of North Carico Street. After the K9 alerted at the scene, the motorist, 50-year-old Justin Alvis, of Danville, was asked to step out of the vehicle, a maroon Ford Escort; however, he fled in his vehicle northbound on Carico.

“He was clearly not familiar the geography of Tuscola,” TPD Chief Craig Hastings said, as Alvis entered the cornfield at a high rate of speed.

The suspect’s vehicle flipped several times and came to a rest in the cornfield north of town.

Arrow Ambulance dispatched ARCH, an air ambulance service located in Effingham, to the scene, though Alvis was not located in the vehicle, Hastings said. The crew continued to search for Alvis in the cornfield for several hours, as first responders were unsure of the extent of his injuries, Hastings said.

It was later discovered that he fled the scene on foot and was spotted by a resident at 6 a.m. Saturday, July 6 walking through an alley in town.

Douglas County State’s Attorney Kate Watson said bond was to be set and charges were slated to be filed Tuesday, July 9, though no details were available prior to press time.

Sparks in the Park 2022 schedule