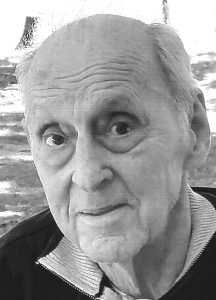 Funeral services were Friday, June 28, 2019 at Shader Funeral Home, 204 N. Locust Street, Arcola, with Rev. Angel Sierra officiating. Burial followed in the Arcola Cemetery. Visitation was one hour prior to the funeral service.

(Dr. Robert) Biggs; and 10 great-grandchildren. He was preceded in death by two sisters, Lenora Peila and Gloria Knies and two brothers, Alex and Louis Mor.

Al received his B.S. in Accounting at Southern Illinois University and worked as an accountant for USI Chemical Corp. in Tuscola for 32 years. He served on the Citizens’ Advisory Committee; the Arcola School Board; Arcola City Council; and Kaskaskia Country Club Board. He was also a former member of SS Simon and Jude Catholic Church in Gillespie.

Al served his country in the U.S. Navy during World War II. He enjoyed playing golf at Kaskaskia County Club where he had two holes-in-one.

Memorials are suggested to the Arcola Foundation or American Diabetes Association.