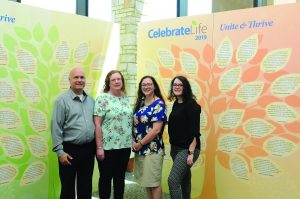 However, Joe’s story didn’t begin only five years ago. He was actually diagnosed nine years ago after several medical issues culminated in a diagnosis of colon cancer. Following surgery and several months of treatment he was disappointed with the outcome when he saw a commercial for CTCA.

“You hear stage IV colon cancer and you assume it is a death sentence, but the oncologist said ‘this isn’t a problem; we can take care of this,’” Kramer recalled. “At the time of my diagnosis my kids were very young, and I wanted to see their graduations, marriages, and my grandbabies. I’ve now made it through many life events and hope to be around for more. I can’t say enough about my kids. When something needed done they didn’t ask questions or worry about themselves. I’m really proud of them.”

Kramer says his wife Alicia has been his foundatio of support with his five children–Corey (25), Haley (23), Bradley and Brody (18), and Courtney (17)–being the reasons he’s fought to stick around.

“More than anything I credit two things for my life,” he said. “Without the Lord and CTCA I believe I would not be alive today.”

Kramer says CTCA continues to be his ongoing care providers.

By 2040, it is estimated that there will be more than 26 million cancer survivors in the United States. As medical research and treatment options continue to advance, more people than ever are living as cancer survivors.

Occurring during National Cancer Survivor Month each June, Celebrate Life is an annual event that brings together both cancer survivors and caregivers for a day of empowerment and celebration. Survivors stand united to support one another, celebrate the moments they’ve gained and encourage those who are currently navigating their own cancer journey.

At the hospital campus in Zion, Ill., the event officially started as the first of seven coach buses, filled with jubilant celebrants, caregivers and loved ones rolled to a stop in front of the hospital. As the doors opened, the eager passenger’s first step was on to a red carpet lined with hundreds of cheering families, friends, caregivers and hospital care team members.

The full story can be found in the June 26 edition of The Tuscola Journal.