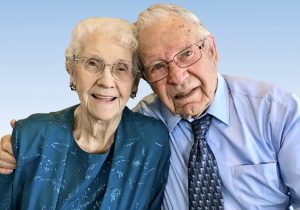 Colin and Frances Davidson of Tuscola are in the smallest of percentiles.

The couple, who spent most of their lives in Newman, will be celebrating 75 years of marriage and according to U.S. Census Bureau statistics only about 1 percent of all married couples make it past 70 years of marriage. So, join the Davidsons as the couple celebrates that rare standard of marriage with an open house from 2 to 4 p.m. Sunday, June 16, at the Jarman Center, 704 N. Main St., Tuscola. Friends, family and the public are invited to attend.

The Davidsons were married June 14, 1944, in Marshall. They are the parents of three children: Cheryl Davis of Sevierville, Tenn., Lonnie (Doris) Davidson of Huffman, Texas, and Mark (Dana) Davidson of New City, NY. The two have eight grandchildren, nine great-grandchildren and eight great-great grandchildren.

Colin first worked as a farmer and then worked for 31 years in the lab at Quantum-USI Division in Tuscola. Frances, meanwhile, managed Woods North Side Market in Newman and later was the librarian at Newman High School.

As to the secret to their long marriage, Colin says, “Get along every day.”

“I don’t know what I’d do without him,” Frances adds. “Colin is my best friend.”