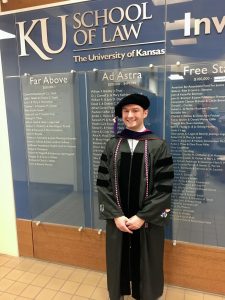 Blake Stokes received his Juris Doctorate Degree from the University of Kansas School of Law in Lawrence, KS in a Hooding ceremony held on Saturday, May 18 and Commencement held on Sunday, May 19, 2019.

While at KU, Blake served as an article editor for the Kansas Journal of Law & Public Policy and was a member of the Veterans and Military Law Society and Federalist Society. He received the CALI Award for International Trade Law, a distinguished award given to the student with the highest grade. He also received KU Law’s certificates in Advocacy Skills and International Trade & Finance and received a pro-bono distinction award.

Upon graduation, he will relocate to Alexandria, La., where he has accepted a job offer from the Attorney General’s Honors Program as a law clerk with the Department of Justice, Executive Office for Immigration Review’s Immigration Court. He also accepted an offer to continue serving in the Army Reserves as a JAG officer in Louisiana.

Blake is a 2011 graduate of Tuscola High School. He earned a Bachelor’s of Science Degree in Political Science from the University of Illinois in 2015. Blake is the son of Dawn Scatterday of Tuscola and John Stokes of Mahomet.

Holding It All Together-Our Dogs