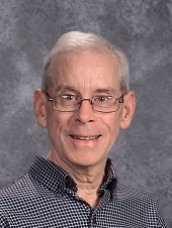 However, with the close of this school year, Huffman will be retiring, again.

Huffman taught in his Indiana hometown for 26 years before retiring for the first time. Following his first retirement, Huffman and his family moved to Mattoon to help a small church under the direction of his daughter Heather and son-in-law Brad Brown. Now they have established a large church, Mattoon Family Worship Center, located on Lerna Road, that draws around 350 attendees each Sunday.

“We knew we wanted to do that, to follow and help them establish a ministry, and that’s exactly what happened,” Huffman said.

However, like many lifetime educators, Huffman found his way back to the classroom; though, this time in Illinois where he began substitute teaching in Arthur and Tuscola

“I substitute taught for about four years at the high school, then East Prairie found out about me,” Huffman said. “I really felt adopted by the high school kids. I just felt completely loved and appreciated.”

However, once East Prairie learned of his background is in elementary education, he became a regular in the middle school’s classrooms. That’s when Austin Martin and Chandler Kerns sat down with Mr. Huffman.

“They said, ‘Mr. Huffman, you are not a substitute, you are a real teacher, and you need to get in here and do this everyday,’” he recalled them saying. “They motivated me to do this again. I enjoyed subbing, but that made a difference to me.”

Huffman spent time in Arthur covering a maternity leave when Tuscola hired him for the 2007-2008 school year. They assigned him to be the “new” fifth grade. However, Huffman began his career in his hometown of Muncie, Ind., 30 years before.

“In the second grade when I had Mrs. Stanley, I decided then that I wanted to be a teacher,” he said. “I have never wavered. I saw her over the years, even after she retired, to let her know that she made a difference in at least one person’s life.”

Huffman attended Ball State University to study education; he received his bachelor’s in ‘77 and masters in ‘87. Throughout his Indiana career, Huffman taught first through sixth grades at various points in various buildings, though he returned to his elementary school for his first teaching assignment.

“When I did go back to the school, the high school hallway seemed so small,” he said. “I could not believe it was so small; it seemed so big at the time.”

Huffman says the size of Muncie made it difficult to follow the students as they branched out to different schools following their elementary years; however he’s stayed close with his “dream team,” who he taught for second and third grades.

For the last 11 years, has been in his elementary classroom at the middle school where he’s enjoyed Tuscola’s rural atmosphere and the ability to follow students as they grow.

“I really like working in the middle school, and I have enjoyed so much watching the kids, year after year, grow up and I still can keep in contact with them. I still watch them in sports; I go to their plays, musicals, and their band and choir events. That is a real joy for me; it’s an opportunity I never had in Muncie.”

The full story can be found in the Wednesday, May 29 edition of The Tuscola Journal.