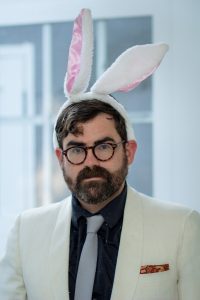 By Kayleigh Rahn
The Unbelievable Oliver may be quite clueless when it comes to properly navigating the third grade. But the lovable character with square-frame glasses and unruly hair has been brought to life in a soon-to-be-released children’s chapter book by a familiar Tuscola name.

“The Unbelievable Oliver and the Four Jokers” will be released Tuesday, May 14 with Tuscola native Shane Pangburn’s name printed on the cover as the illustrator.

The author is Pseudonym Bosch–the anonymous children’s author of nine books including “The Secret Series” and “The Bad Books,” while Pangburn says he is in new territory. He’s contributed illustrations to textbooks and how-to guides, however, never a book in its entirety.

“(Bosch) has been through this before, so it’s exciting to be experiencing this for the first time,” Pangburn said. “I’ve wanted to make a book my whole life, so I am excited to have done that with a complete and total book.”

Pangburn met Bosch 10 years ago while he was working for the children’s department of a bookstore and hosted Bosch for a book signing. About four years ago they began talking about working on a project together when in 2017 they started working with “Oliver.”

“We collaborated all the way through the process,” Pangburn said.

“The style compares to what I typically do,” Pangburn said. “It’s a bit more cartoony since it is a children’s book for 7-9 year olds. It’s youthful but in line with what I’ve been doing.”

To create Oliver and his pals, Pangburn used Adobe Illustrator, a software program he’s used since he was a student at Tuscola Community High School when now retired Industrial Arts teacher Jon Hart purchased the software for the school.

Following his graduation from TCHS in 2001, Pangburn attended Southern Illinois University in Carbondale where he worked with the student-ran newspaper “The Daily Egyptian” where he drew cartoons and illustrated a well-loved comic Gus Bode.

It seems youth literature has been a part of much of Pangburn’s professional career as he’s worked in the children’s department of a bookstore, has worked as a book event coordinator, and now is the lead producer of YALLWEST, the largest young adult and middle grade book festival on the west coast. The 2019 installment of the event ran April 29 through May 2 at Santa Monica High School in southern California. This year’s event brought in around 20,000 attendees.

Throughout the year, Pangburn hosts several events in the Los Angeles, Calif., area where Pangburn lives with his wife Jennifer.

The 192-page book–published by Dial Books–is the first installment of a series about a third-grade magician turned investigator with the help of wisecracking rabbit. The book is available for pre-order through Amazon and Barnes & Noble, among other outlets.