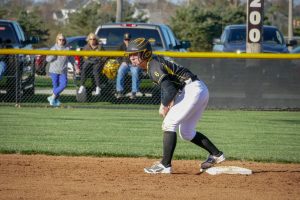 Senior pitcher Ashton Smith and junior hurler Kaitlyn Reifsteck were strong in the circle for Tuscola’s softball team, delivering three shut out victories this past week. Reifsteck struck out ten while giving up just four hits to collect a 3-0 victory over a good Teutopolis team on Tuesday the 16th. She then ended the week with a two-hit gem fanning ten more in a 3-0 win over Shelbyville scattering two hits and a walk out over seven innings of work.

In the middle was Smith saying no to the Clinton Maroons on their own diamond. The fourth year player notched a no-hitter, striking out five in a run rule shortened 11-0 affair on Wednesday.

Tuscola scored first in the showdown at Ervin Park against T-Town. The Warriors’ Kendyl Ring singled with one gone in the bottom of the first, swiped both second and third, and trotted home on a sac fly by the squad’s current RBI leader Jackie Watson to make it 1-0 Warriors. They threatened two more times but were caught on the base paths before Natalie Bates pushed across a pair of insurance runs with an opposite field homerun in the fifth to give the Warriors some 3-0 breathing room. Reifsteck induced five fly balls and struck out the final batter to secure the non-conference victory.

Bates went 2 for 3 in the game, stole two bases, drove in a pair, and scored a run. Taylor Musgrave, Claire Ring, Jessie Martin, Smith, Kendyl Ring, and Watson all added a base knock to the box score.

Bates set the table one night later in Clinton to lead off with a single before stealing second and third and scoring on an RBI base hit by Watson. Watson gave way on the base paths to Sophie James who swiped second and scored on a double by Reifsteck putting the Warriors on top 2-0 after a half. Tuscola blew it open with six in the third highlighted by doubles by C. Ring and Abby Jacob. They added three more in the fifth, pushing it to 11-0 Warriors. Bates singled to get the ball rolling, stole a pair of bags, and scored on a ground ball by Watson. Martin followed with an RBI single, and Smith fanned the side in the fifth to invoke the 10-run rule to end the game.

The full story can be found in the Wednesday, April 24 edition of The Tuscola Journal.