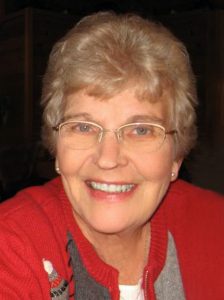 Visitation will be held on Friday, April 26, from 4:00 to 6:00 p.m. at Duffy-Pils Memorial Home,100 W. Maple Street, in Fairbury.   In lieu of flowers, memorial contributions may be made to the Alzheimer’s Association, Fairview Haven Nursing Home, or OSF Hospice in Bloomington.

She was born June 14, 1929, in Forrest, the youngest daughter of Roy and Martha Haab Metz.   She attended Miller Country School and graduated from Forrest Township High School.

Royalene married Robert Toombs on May 21, 1955 , in Fairbury.  He passed away on August 31, 2010.   Royalene worked at State Farm Insurance in Bloomington before starting her family.  During their marriage, Royalene helped with their home rental and apartment business in Normal; and helped manage and operate two small family motels in Urbana.

She enjoyed spending winters in Florida for over fifteen years, their lake house at the Ozarks, and enjoyed traveling to Colorado, Indiana, Tennessee, and North Carolina to visit her children and grandchildren.  She also looked forward to an annual bus trip with family and friends to Branson, Missouri, for 20 years.  She loved to do cross-stich projects, and enjoyed reading.

Royalene was preceded in death by her parents; both of her brothers, Earl and Ivan; and all four of her sisters, MaryAnn Plattner, Ruth Thiel, Betty Nussbaum, and Mildred Allen; and her husband of 55 years, Robert Toombs.