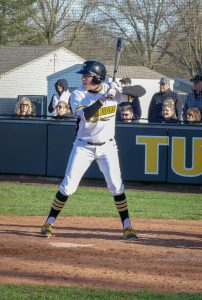 By Lenny Sementi
Head baseball coach Adam Carver looked to his pitching staff this past week for a pair of Central Illinois Conference victories. Carver tossed the pill to junior Ryan Bartley in a thrilling 3-2 pitchers duel win over Sullivan on tax day Monday the 15th while also utilizing senior Brayden VonLanken for the save. Bartley worked six innings, giving up a pair of unearned runs on three hits and two walks and fanned nine. VonLanken entered in the seventh and leaned on his defense in an 11-pitch outing, stranding one to end the suspense.

“Bartley looked great,” commented Carver. “He was able to throw multiple pitches for strikes. When he gets ahead in counts and keeps the ball down, he is tough to hit, it was good to see.”

A few days later on Wednesday the 17th junior ace Logan Tabeling took the hill in a dominating 15-strikeout performance at Ervin Park in an 11-1 drubbing of the Clinton Maroons. He faced three more than the minimum to scatter one hit and two walks out over six innings of work, allowing just one to cross the dish. He has now struck out 69 on the season and owns four victories with an ERA of 1.51.

The Wright State commit is swinging a big bat, as well, delivering multiple hits in both contests including the go ahead RBI in the seventh versus the Redskins. VonLanken was tops on the offensive stat sheet posting five hits and two RBI’s in eight at-bats during the week. Tuscola pounded out five extra base hits in the victory over Clinton led by round trippers from VonLanken, Jalen Quinn, and Max Wyninger, as well, as two baggers from Tabeling and Lucas Kresin.

“Tabeling’s hit was huge for us,” stated the coach. “Sullivan was scrappy and made about every play they could, so we had to earn our runs today. We had some hard hit balls held up by the wind, we hit a little better than our three runs showed.”

Carver’s crew scored first at Sullivan. Will Little walked with one gone, stole second, moved on single by Cade Kresin, and scored to make it 1-0 Warriors.

The full story can be found in the Wednesday, April 24 edition of The Tuscola Journal.

Lady Warriors basketball carry on in the season to defeat St. Teresa