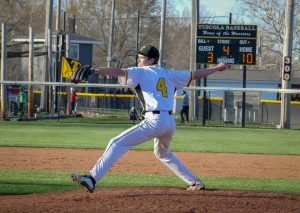 Photo: Tracy Hornaday
Cole Cunningham strides out for a pitch during a home game against Meridian Friday, April 12.

VonLanken went yard twice in their 14-1 opening win on Tuesday versus St. Teresa. He then drove in a pair two nights later on Thursday with two hits, including an RBI double, in a 5-2 road win over Georgetown-Ridgefarm. And, he ended the week with a two-hit, two-RBI performance in a Central Illinois Conference win over Meridian to keep the Warriors unbeaten in the league.

Will Little nearly duplicated the heroics by VonLanken in the Meridian game posting five RBI’s and three runs scored during a 3-for-3 effort at the dish that included a homerun in the second stanza. Cade Kresin joined in the long ball fun as well going yard twice, once in the week’s opener and once more at the end of the three-game stretch. The three seniors combined to score 13 runs, pounded out five homeruns, 16 hits, 10 extra base hits, and 24 RBI’s.

Tuscola put 11 on the board in the bottom of the first against St. T., which included for some a career stat line but for VonLanken it all came in one stanza. The big man belted a three-run dinger out of the four hole then drove in two more later in the frame on another moon shot adding two homeruns, two runs scored and six RBI’s to the official box score. The kicker was it was not the first round tripper of the game. Freshman Jalen Quinn took the second Bulldog pitch of the game yard to make it 1-0 quickly.

The Warriors added three more to the board in the bottom of the fourth. Kresin, another fourth year player, continued his hot steak with a three-run long ball following a leadoff double by Max Wyninger. Kresin drove in four in the contest during a 2-for-3 effort at the plate. Wyninger also had a pair of hits as did junior classmate Logan Tabeling. A third junior Lucas Kresin picked up the win scattering three hits and no walks out over five innings of work allowing one to cross the dish while striking out nine.

Tuscola put crooked numbers up in the first and third two nights later at Georgetown dropping the Buffaloes 5-2. Tabeling had the pill for the Warriors allowing one to score on just three hits and a walk. The fireballer fanned nine in the contest before Michael Ludwig collected the save, sitting down the final two on just two pitches invoking a fly ball and a ground ball to end the game.

The full story can be found in the April 17, 2019 edition of The Tuscola Journal.