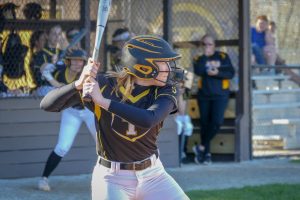 Sophomore Jessie Martin celebrated her first start in the vaunted Cola Wars in a grand way. The second year player invoked the new 15-run rule after four innings with a walk off grand slam in the bottom of the fourth. Tuscola’s softball team broke open a tight game, scoring 13 runs in their final two at bats on Monday the 8th to upend the Riders 18-2 and collecting win number 13 on the year.

They collected 14 one night later on Tuesday, pushing ten across the plate in the bottom of the fourth while running past St. Teresa 12-0 before dropping their first of the year a few nights later on Friday falling 7-4 to a very good Meridian squad. It was also the first loss in the Central Illinois Conference for the Warriors.

Ashton Smith was the winning pitcher in the victory over the Riders scattering three runs and three walks out over four innings of work giving up two runs, both earned. The senior took care of five on her own. Kaitlyn Reifsteck took the hill against the Lady Bulldogs from St. T. The sophomore allowed just two to reach safely while striking out eight in the shut out victory. Both threw in the loss to the Lady Hawks. Reifsteck got the start and the loss despite a great outing that saw the second year starter strike out 11. She allowed seven hits, seven runs, three earned and a walk in six and a third. Smith took care of the final two fanning both.

Tuscola put three on the board in the first against Arcola thanks to back-to-back hits by Natalie Bates and Kendyl Ring and a two-RBI single by Martin who then scored on a RBI double by Smith. Martin was 4 for 4 on the day, while Bates went 3 for 4. Smith reached safely twice including a double and a triple. Arcola managed to push a pair across in the top of the second, but that was all they could muster. The Warriors put it away with four in the third and nine in the fourth. Taylor Musgrave tripled in the third to drive in a pair, and Martin ended it with the walk off grand slam in the next frame.

Bates, Ring, and Martin were at it again the next night versus St. Teresa. The trio all singled in the bottom of the first, scoring a pair to give the Warriors an early 2-0 lead. Which is where it would stay until a 10-run bottom of the fourth and a one, two, three top of the fifth ended it by the run rule 12-2. Martin continued to stay hot with a 3-for-3 outing with two doubles reaching safely seven consecutive times in the two-game stretch.

The full story can be found in the April 17, 2019 edition of The Tuscola Journal.