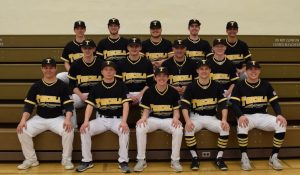 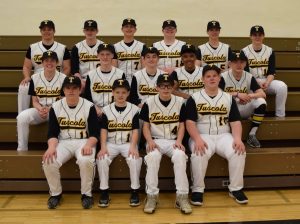 By Lenny Sementi
Tuscola’s baseball team opened the Annual Tuscola Round Robin with a five-run win, 10-5, over Eastland-Lanark in their opener of the two-day event. They then backed it up with a signature 7-5 win over an Effingham St. Anthony team that entered the game with 10 wins and just one loss on the year in their second outing on Saturday afternoon. Coach Adam Carver used five pitchers in the two game sweep.

Cade Kresin threw three and two thirds while collecting the win over Eastland on Friday. The senior gave up two runs on three hits and three walks, striking out two. Junior Ryan Bartley worked the other three and a third allowing three to touch the dish on three hits, four walks and four strikeouts.

Warrior ace Logan Tabeling notched the win against St. Anthony. The junior fast-baller gave up a pair in the top of the first before settling in to give up just two runs total in five innings of work, fanning eight batters while giving up three hits. Senior Haden Cothron was next with the pill for Tuscola giving three runs on just three hits in one inning of action. Brayden VonLanken entered with a two-run lead in the top of the seventh and retired 3 of the 4 he faced, striking a pair to get the save and secure the victory moving the Warriors to 12-2 on the season.

Tuscola’s Jalen Quinn provided the offensive punch against St. Anthony. The freshman went yard from his leadoff position in the bottom of the first, erasing one of the two runs the visitors scored in the top half. He went deep again in the second, but this time it was a three-run bomb that drove in Max Wyninger and Cameron Ochs who reached on a walk and an error to put the Warriors in front 5-2. Tabeling had scored earlier in the frame thanks to a hit by a pitch and an error.

Carver’s gang added one more in the fourth on back-to-back base knocks by Quinn and Lucas Kresin then pushed one across in the fifth on a pair of doubles by Tabeling and Wyninger to increase the lead to 7-2. St. Anthony closed the gap with a homerun in both the sixth and the seventh before VonLanken secured the win and the save, moving the Warriors to 11-2 on the season. Quinn had tallied three hits, two homers and four RBI’s in the contest.

VonLanken and Will Little came up big in the opening versus Eastland, each adding three hits to the team’s stat line, while Ryan Bartley and Cade Kresin delivered a pair of hits. Bartley drove in four runs, two of which came on a two-RBI double then scored on a double by Little in a four-run bottom of the first. Quinn had an extra base hit, as well, providing insurance runs in a five-run sixth thanks to an RBI triple. Both Kresins and VonLanken added RBI’s to the cause also as the Warriors cruised to the five-run victory.