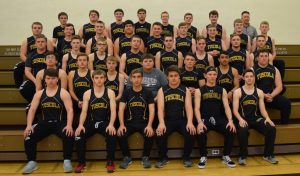 By Lenny Sementi
Tuscola’s boys’ track team leaned on their elders to show the way this past Friday night in Arthur. Seniors Noah Woods, CJ Picazo, Turner Hastings, and junior Brandon Douglas shined in a thrilling 86-83 win over Arcola at the 15-team Arthur Invite to collect first place hardware at the end of the evening.

Woods was tops in the scoring department having a hand in 34 points. He won the open 100 edging Douglas for first place by less than a half second to break the tape in 11.8 seconds. He also won the open 400 with a season best time of 51.78 and took home third place points in the 200 while also joining with Douglas, Hastings and Clayton Hausmann to collect the silver in the 4×100-meter relay.

“Noah was the obvious point-getter for the evening, for us to maximize points scored, he’ll have to be strong in the open races for us,” Coach Ryan Hornaday said. “It was an exciting meet, the lead swung back and forth between us and Arcola all night. We were down by one point after the mile, 75-74. Noah scored six in the 200, which put us up 80-75 since they didn’t score in that event, then they took second in the 4×4 to bump their score to 83 and we got six points for placing third in the 4×4 and finished with 86. Turner had the fastest split as anchor leg in the 4×4 that saved the team win for us.”

Relays were responsible for 28 points by the end of the meet. Douglas, Hausmann, and Hastings all turned left in the 4×1, 4×2, and 4×4. Douglas, like Woods, scored in four events to donate 30 points. Hastings and Hausmann had their hands in on 22 points. Freshman Logan Wallace was the fourth leg in 4×4 and also joined with Hausmann, Mason Day, and Jordan Middleton for a third place finish in the 4×8.

“Clayton Hausmann was incredible in the relays for us, he competed in all four (including the 4×8 and 4×1 back-to-back) and managed to produce solid splits in both,” stated the coach. “Logan Wallace and Mason Day stepped up for the good of the team delivering in the middle distance relays.”