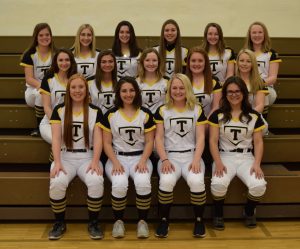 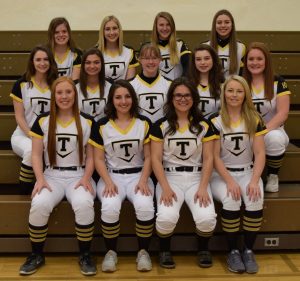 Tuscola’s softball team took full advantage of Natalie Bates to set the tone early in a pair of Central Illinois Conference wins this past week. The speedy senior led off both games for the Warriors in the first and scored both times as the Warriors held on to upend a good Central A&M squad 7-5 on Tuesday the 2nd, and then snuck past a strong pitching performance by Shelbyville’s Jocilyn Lewis in a 2-1 thriller on Saturday.

Kaitlyn Reifsteck was on the hill in both skirmishes giving up five runs, two earned on nine hits and just one walk. She fanned 19 in 14 innings of work, adding two wins to her season stat sheet.

Tuesday, April 2
Tuscola-7; Central A&M-5
Bates opened the contest against the Raiders with a bunt single, stole both second and third and scored on a sac fly by catcher Jackie Watson to break the ice. The Warriors then leaned on the long ball in the top of the second. Reifsteck led off the three-run stanza with a double and trotted home on a four-bagger by Claire Ring making it 3-0 Warriors. The sophomore pitcher was 3 for 4 at the dish in the game.

Abbey Jacob followed three batters later with a solo homerun to push the lead to four. Ashton Smith was the scoring catalyst in the two-run fourth for Tuscola. The senior battled a nine-pitch at bat that resulted in a hit by pitch, moved on a single by Kerri Pierce and scored on a two-RBI double by Bates. Reifsteck and Bates both singled in the fifth to provide one more run ultimately securing the road win for the black and gold.

Saturday, April 6
Tuscola-2; Shelbyville-1
Bates again was the scoring catalyst in a CIC victory. The Warriors manufactured a run in the bottom of the first thanks to a leadoff double by Bates, a sac bunt by Kendyl Ring and ground ball to the right side by Jackie Watson to make it 1-0 Warriors. Bates was at it again in the third delivering Tuscola’s second run of the game thanks to a one-out triple before K. Ring laid down a squeeze bunt pushing it to 2-0 Tuscola.

Tuscola Warriors basketball awards are in for 2020-2021 season

Kaitlyn Reifsteck and the Lady Warriors softball team gets stingy