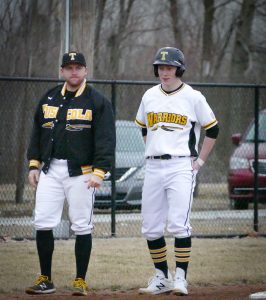 File Photo: Tracy Hornaday
Senior Will Little leads off from third while coach Adam Carver looks on during baseball action against Westville on Wednesday, March 13 at Ervin Park. 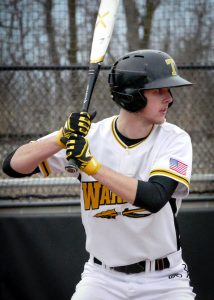 By Lenny Sementi
Tuscola’s baseball team rebounded quickly from a loss to Champaign Central with a pair of Central Illinois Conference victories. Coach Adam Carver and his boys opened the CIC Tuesday, March 26 with a win on the road upending a strong Clinton squad 3-1 in a seven-inning pitchers duel. They backed it up two nights later on Thursday, March 28 running past Shelbyville 10-0 in a five-inning slaughter rule shortened affair.

Lucas Kresin took the hill and the win versus Clinton. The junior righty worked six and two-thirds, giving up one run on three hits and two walks. Michael Ludwig retired the final batter in the bottom of the seventh to secure the Warrior win and the save. Tabeling continued to impress in the five-inning shut out victory over the Rams. He allowed six to reach, giving up three hits, two of which came in the first inning and three walks in Tuscola’s ninth win of the season while striking out 13. He has faced 66 batters and struck out 37 of them to date in 2019.

There were goose eggs on the board in the first frames at Clinton before both teams generated some offense in the third. Which in fact was the only stanza that saw anyone touch the dish. The Warriors put a crooked number up in the top half on four hits, an error, and a walk. Max Wyninger led off the frame with a single, moved on a stolen base and a pass ball, and scored on an error on a ground ball by Cameron Ochs. Ochs was putout at home on a bases-loaded force before back-to-back hits by Kresin and Jalen Quinn plated one more. Brayden VonLanken donated the final RBI with a base hit to center, scoring Quinn to make it 3-0 Warriors.

The Maroons cut the lead to two with an RBI double in the bottom to make it 3-1 Tuscola, which is where it would stay to give coach Carver his first CIC victory, moving the black and gold to 8-2 on the year overall. Ryan Bartley led Tuscola at the plate going 2 for 4 as the Warriors out hit the Maroons 8-3, though Bartley was left both times.

Bartley got the ball rolling against Shelbyville with a leadoff walk in the bottom of the second. The junior outfielder moved to third on a double by Wyninger and trotted home on a single by Ochs. VonLanken set off the fireworks in the third with a monstrous homerun well over the center field fence that scored a pair making it 3-0 Warriors.