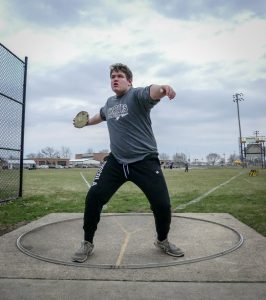 By Lenny Sementi
A small group of seniors are poised to lead coach Ryan Hornaday’s boys track team by example thanks to their work ethic.

CJ Picazo, a state qualifier in the discus a year ago, will join up with classmates Turner Hastings and Noah Wood, who were also at the state meet for the 4×400 relay last May, Gage Russell, who traveled to Charleston as well in 2018 to do battle with the states best in the pole vault, and JD Barrett, who will anchor the distance events for coach Hornaday. The five fourth-year competitors will lead the way for Hornaday’s horde during the 2019 season.

Picazo got the ball rolling at the indoor state meet taking eighth in the shot with a toss of 48 feet 2 inches to collect state hardware and won both the shot and the discus at the team’s first outdoor meet in Sullivan to help the Warriors to a win last Tuesday the 26th over the likes of the host Redskins, St. Anthony, and Cerro Gordo-Bement. He was also strong in a second place team outing in the first home meet two nights later on Thursday capturing second in both events. Also lending a hand in the throwing events for long time coach Stan Wienke will be seniors Brad Mast and Cade Morgan, Junior Josh Dyer, sophomore Hans Goodmann and freshman Logan Wallace. Dyer was second at Sullivan in the shot and third at home and also scored in the disc.

Woods joined Picazo on the podium at indoor state taking eighth in the open 400 with a time of 52.62 seconds. He will be a mainstay for Hornaday in the 400 and will also secure points in the sprints like he did at Tuscola taking third in the 100. Hastings was right in front of him finishing second, adding five points to the team totals while taking first in the 200 at Sullivan. Fellow senior Haden Cothron turned in a fourth place outing in the 200 meter at Tuscola. Junior Brandon Douglas heads up a talented group of underclassmen in the sprints giving the coach options in the opens and relays. Ashton Jones, Grant Hardwick, Clayton Hausmann, Colin and Connor Lewis, and the Boyd brothers James and Mark combined to score in the 100, 200 and 400 meter relays in the first two meets highlighted by a first place finish in the 4×4 with a time of 3 minutes and 44 seconds.