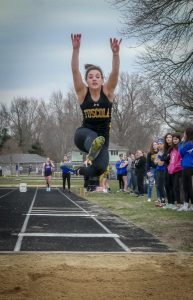 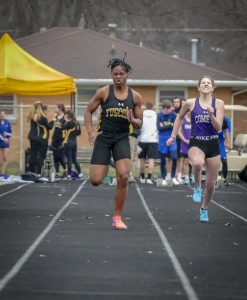 By Lenny Sementi
McKinlee Miller is the leader of the pack for head girls track coach Lacey Diaz. Miller, who qualified for the state track meet in both the long and triple jump, will lead the way for Coach Diaz’s young but talented team. She competed in two events a few weeks ago at indoor state missing the finals in the 60-meter low hurdles by less than a half second before climbing on the podium in her signature event the triple jump.

She broke her own school record in the meet with a leap of 35 feet 5 and 3/4 inches. The fourth-year trackster twice eclipsed the 35-foot mark en-route to the fourth spot on the podium.

She opened her outdoor season with a pair of firsts in the long jump and the 100-meter hurdles and took second in the triple, scoring 17 points to help the Warrior win the Sullivan Quadrangular by nearly 20 points. She backed it up with another first in the long jump, leaping 16 feet flat and a second in the triple in a four-team home meet last Thursday, donating 10 points in the Warriors’ winning cause.

Classmate Lainey Cummings is another senior that coach Diaz will lean on to show the way. She took third at Sullivan in the 100-meter hurdles and was part of a fourth place effort delivered by the 4×400 squad.

Miller’s partner in crime at the indoor state meet was freshman Alyssa Williams. Williams ended her day .16 seconds short of the finals in the 60-meter dash crossing the line in a personal best 8.27 seconds. She was just as strong outdoors winning the 100 in both the Sullivan and Tuscola meets. Williams doubled up at Tuscola crossing the line in first in the 200, as well. She also shined in the 4×100 in both meets.

Joining Williams on the second place 4×100 team at Sullivan and third place team at Tuscola were Ava Cothron, Skylar Wilkins, and Hannah Lemay. Wilkins also donated team points in both the 100- and 200-meter opens taking fifth at both Tuscola and Sullivan before taking third in the grueling 300-meter hurdles at Tuscola. She also picked up fourth place points in the high jump in Tuscola.