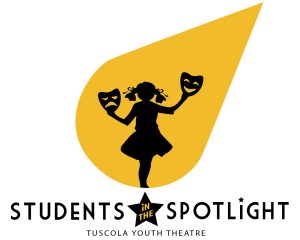 By Kayleigh Rahn
Tuscola children will soon have another opportunity to shine in the spotlight with a new series of local camps that will focus on an introduction to theater.

The new Student in the Spotlight Tuscola Youth Theatre camps will be led by TCHS Drama Club sponsor and English teacher Johanna Steffens, who says the events will get underway this summer and hopefully evolve over the coming years.

The first camp will be the “Drama Day Camp: Primary Edition” for Tuscola students entering first through fourth grades in the 2019-2020 school year. The camp will be held in the North Ward cafeteria from 9-11:30 a.m. on June 3-7 and June 10-14.

Steffens will direct the elementary school drama day camp with help from a couple college-age students for additional hands on deck. Students will start learning basic drama skills including: voice, dance, performance, and a basic introduction to technical theater, the camp form says.

Students will look at basic drama skills including: voice, dance, performance, and a more detailed look at technical theater.

“The East Prairie kids will have a chance to perform on the high school stage,” Steffens said, which means they will receive their first looks at the lighting and sound workings, as well.

“I’ll be there, but the high school kids will do more of the directing for this one,” Steffens said. Each camp will culminate with short plays that will be open to the community on the final Friday of camp.

“While they’re not going to be full-blown productions, they will be getting their feet wet,” Steffens said. In the future, Steffens is considering a full kids production during the summer, although that may come after a few more years.

“Doing theses camps will give both parents and kids a better understanding of what the high school productions are all about,” Steffens said. “They will also get to meet the kids who aren’t on stage but help with the set or lighting.”

The full story can be found in the Wednesday, March 27 edition of The Tuscola Journal.