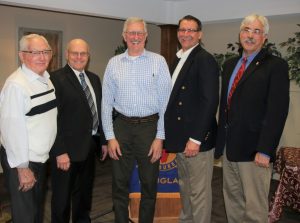 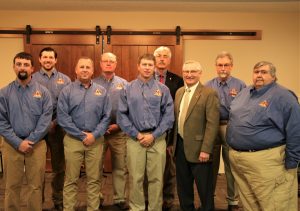 He emphasized the need to increase farm income opportunities through advocating for trade agreements with countries like China and Japan and finding resolutions to trade disputes. Growing a profitable livestock sector, seeking investments to improve our transportation infrastructure and monitoring concentration of input suppliers and markets as needed are also other income avenues.

Guebert spoke of conversations he has had recently with U.S. Secretary of Agriculture, Sonny Perdue as well as Illinois Director of USDA Rural Development, Colleen Callahan.

The Illinois Farm Bureau (IFB) looks to be the lead on environmental stewardship and advocacy referencing the Monarch butterfly as an endangered species.

Looking to be a catalyst, the IFB is working with three national insurance companies for their membership to have access to more affordable health insurance options as well as quality healthcare services.

Guebert stressed the importance of continuing to build relationships with the Illinois executive branch, constitutional officers, agency leadership and our legislators to promote a fair tax policy and reasonable regulations that will improve the business climate in Illinois.

By engaging the membership will only lead to increasing member participation in action requests and build awareness of the value of membership. He also touched on the need to provide opportunities for young farmers and to work closely with county farm bureaus and other ag organizations.

“Do your part…be engaged,” Guebert said in closing.

Guebert is the 15th president of the Illinois Farm Bureau and serves as full-time executive officer. He is also president of COUNTRY Financial, Illinois Agricultural Service Company, and the IAA Foundation. He represents IFB on the coordinating committee for GROWMARK, Inc.

Guebert and his son Kyle operate a farm where they grow corn, soybeans, and wheat. In 2001, he served on the IFB Co-op Task Force and completed the Agricultural Leaders of Tomorrow leadership training. Guebert was named a Master Farmer in 2006 by Prairie Farmer magazine.

In March 2007, he accompanied Jack Lavin, director, Department of Commerce and Economic Opportunity for the state of Illinois, and other delegates on a trade mission to India to open a trade office in New Delhi.  In June 2007, he traveled to Poland with then Lt. Governor Pat Quinn on a four-city cultural exchange and trade mission that developed and enhanced the relationship between Illinois and Poland. In March 2009, Guebert was part of the farm/business delegation to Cuba under the direction of Jack Block, former Secretary of Agriculture. Gov. Quinn appointed Guebert to the Taxpayer Action Board in April 2009 and in 2012 was appointed to the Governor’s Export Advisory Council. In 2011, Guebert participated in a trade mission to China with Governor Quinn and several business leaders from across the state.

Guebert has a bachelor’s degree in agriculture education, with a minor in animal science from Southern Illinois University. Guebert and his wife, Nancy, reside in Ellis Grove. They are members of St. John’s Lutheran Church in Chester where Rich has served in many capacities. Rich and Nancy have two granddaughters, Emma and Ella, daughters of Kyle and his wife Michelle.

Dallas also presented a plaque and pin to retiring director John Wax who did not seek re-election to the board of directors after serving since 2012.

Charlotte Wax was recognized as a 65-year member of the Douglas County Farm Bureau, and she recently turned 100 years old. She was presented with her very own Centennial gate sign.

This year’s winner of the Joe and Sue Summerville agricultural scholarship was announced, and Makenna Green of Arthur is the recipient.  She will be attending Lake Land College this fall and plans to major in agronomy.

Representative Brad Halbrook presented the DCFB with a certificate from the 101st General Assembly of the House of Representatives acknowledging them as a grassroots organization that has enhanced and strengthened the lives of farm families and the lives of those who live around them by building vibrant, prosperous agricultural communities.

Landon Stenger from Senator Chapin Rose’s office also made a presentation from the Illinois Senate of the 101st General Assembly to the DCFB in recognition of their 100th anniversary celebrating a century of service to agriculture.