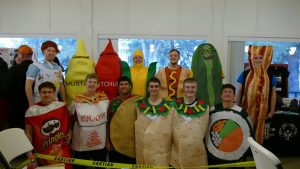 By Kayleigh Rahn
The Tuscola Community High School boys’ track and field team is warming up for a successful 2019 campaign. However, as the team gets to work under the warm spring sun, know that before they hit the track this season, they were making waves and “freezin’ for a reason” during the annual Polar Plunge for Special Olympics.

The Polar Plunge is the primary fundraiser for Special Olympics Illinois, according to TCHS boys’ track coach Ryan Hornaday. This year the Tuscola team raised just more than $1,400 to contribute to the $10,585 Tuscola’s boys have raised for Special Olympics over the last seven years. The boys participated in the 19th annual event at Lake of the Woods in Mahomet Saturday, March 9. Over the last 20 years, more than 72,500 plungers have raised more than $20.6 million across the state, according the Polar Plunge website.

“The concept is for ‘plungers’ to raise a minimum of $100 to take part in the event,” Hornaday explained. “Anyone who raises the minimum is allowed to run into the frigid water of the lake.”

The Polar Plunge has been on Hornaday’s radar since he volunteered for the event during college. During former TCHS principal Brad Allen’s first year at Tuscola he challenged Hornaday to take a team to the event.

In 2019, for the second consecutive year, the team brought home the award for best team costume for their Warrior Cafeteria theme.

“I leave it up to the group to come up with a costume theme each year,” Hornaday said. “The kids are pretty creative about it. We’ve done: The Zoo, super heroes, Christmas, and Pirates to name a few.”

Junior Mason Day–a 4×400 and 4×800 relayer for the Warriors–says each year the team tries to be creative with the costume theme, and this year he feels they had a good variety as they each dressed up as food items.

The full story can be found in the Wednesday, March 20 edition of The Tuscola Journal.