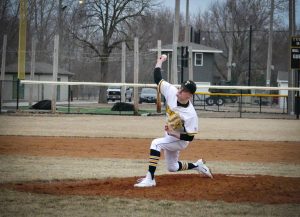 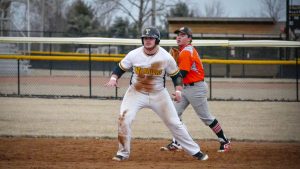 By Lenny Sementi
Strong pitching and timely hitting led to a 10-0 slaughter rule shortened, six-inning win over Westville at Tuscola’s Ervin Park Tuesday, March 12. The Warriors welcomed the new leader of the tribe head coach Adam Carver in style as three pitchers combined to no hit the visitors from the west.

Another new-comer to the program had a day as well, as freshman short stop Jalen Quinn started his Warrior career delivering four hits. Carver also got production at the plate from Lucas Kresin and Brayden VonLanken who paired up to provide five base knocks. Kresin was the two hitter most of the season a year ago and was called on to bunt in a lot of situations. This year is a different story. Will Little and Max Wyninger both showed some restraint early in the season. The duo collected seven walks in the game and provided eight quality at bats where they saw at least six pitches.

“We moved Lucas a few spots down the lineup this year to help drive in runs, and he did just that,” commented coach Carver. “Offensively, I figured we may struggle a bit out of the gates just because we have been indoors during the preseason, and we did but some guys made some adjustments as the game moved along, and Quinn was good for us in the lead off spot.”

Logan Tabeling got the start and the win as he worked two and a third before giving way to a 40-pitch limit installed by the coaching staff. The junior was on point fanning six of his seven outs. Haden Cothron struck out six as well in limited early season use, and Michael Ludwig closed the door on the no hit shutout in the final few frames striking out three of the five he faced.

Tuscola took full advantage of the Tigers’ control issues on the mound posting 13 free passes. The Warriors scored two in the first and two more in the fourth to make it 4-0 early. Then blew it wide open, taking advantage of four of those free passes to plate four runs. They ended it one inning later by putting two more on the board invoking the 10-run rule.

The full story can be found in the Wednesday, March 20 edition of The Tuscola Journal.