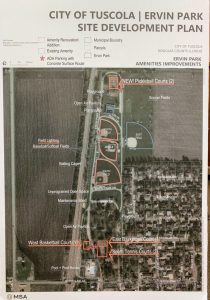 However, during the Monday, Feb. 11 council meeting, city administrator Drew Hoel announced that the city will be receiving a $328,100 matching grant to help pay for various upgrades and maintenance at Ervin Park.

The project will include the resurfacing of both tennis courts and basketball courts along with new lighting for the three ball diamonds on the west side of the park drive.

In all, the state announced last week about $28.9 million in grants for 89 projects that will help communities acquire open space and develop and improve recreational facilities throughout Illinois, according to a press release from the state’s Department of Natural Resources The grants are through the state’s Open Space Land Acquisition and Development (OSLAD) program, administered by the Illinois Department of Natural Resources (IDNR). The grant programs can provide up to one-half of a project’s funds, and when combined with the investment of local matching funds will support more than $56 million in local park development projects and land acquisitions statewide.

The OSLAD program began in 1987 and has invested $419.4 million in 1,765 local park projects over its lifetime. The program receives dedicated funding from a percentage of the state’s Real Estate Transfer Tax. The City of Tuscola last received an OSLAD grant in 1998 when the walking path, south restrooms, and pool slide and filter were installed, according to city officials.

The proposed project includes resurfacing the tennis and basketball courts and replacing lighting on the south baseball diamond, the Little League diamond, and the north softball diamond. The project cost will be about $656,200, which would require the local, 50 percent match to be about $328,100, a portion of which can be met with city labor contributions to the project, according to city notes.

The full story can be found in the Wednesday, Feb. 13 edition of The Tuscola Journal.