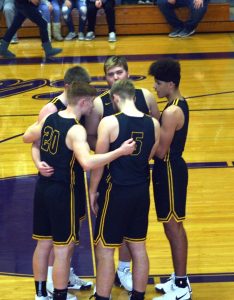 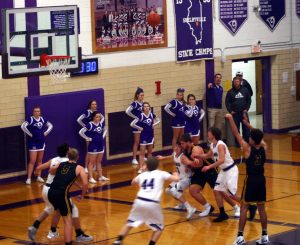 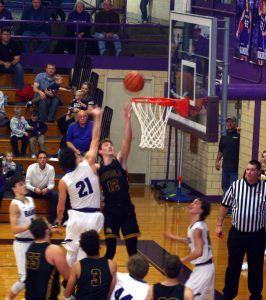 By Lenny Sementi
It took a big game from an unknown commodity to upend Tuscola’s boys’ basketball team on the road at Shelbyville. Coach Justin Bozarth and his crew were hit by two surprises Friday, Jan. 11.

The game at Shelbyville was moved up an hour in an attempt to beat Mother Nature and her snowstorm forcing an early bus departure. Then Brayden Nichols a sophomore shooting guard for the Rams decided to toss in a career best seven three pointers en-route to 27 points, beating his career best by nearly 10 points, which helped the home team secure the Central Illinois Conference victory 62-55.

Nichols stepped up to the plate handing Bozarth and the boys their first CIC loss of the season despite a career night from freshman Jalen Quinn. Quinn went toe to toe in the scoring department with one of the best around, Shelbyville senior Malcom Miller. Miller resides near the top of the area leaders list and showed why Friday evening when he dropped in 25 points, but Quinn was not to be outdone, scoring a career best 25 points of his own. He was good on seven fieldgoals and was a perfect 8 for 8 from the line.

“We knew going into Shelbyville that Malcolm Miller was one of the best players in the conference,” stated coach Bozarth.”Our game plan was to make him work for his points. We thought Will Little and Ben Dixon contested him well forcing him to make some extremely difficult shots over our defense. And didn’t count on Nichols scoring that much, unfortunately, we lost track of him too many times. To his credit, very few high school players can go 7 for 10 from three, but it was his night.”

Brayden VonLanken found his way to the charity stripe, as well, by attacking the inside. The Warrior big man connected on 9 of 10 on his way to 15 points as Tuscola went 21 of 22 from the line. Which is where the Rams ultimately cinched up the win, draining 10 of 10 in the final six minutes of the fourth quarter.

A pair of threes from Nichols midway through the first was all that separated the two squads after one with the Rams in front 19-13. Tuscola hit just one field goal in the frame, a three by Jacob Kibler, but as a team the boys sank 8 of 8 from the line in a very physical first eight minutes of action.

The full story can be found in the Wednesday, Jan. 16 edition of The Tuscola Journal.