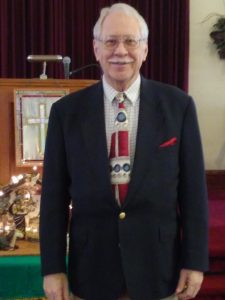 Wilder and his wife Connie have three grown children, six grandchildren, and a few great-grandchildren. He was born and raised in Joliet in Will County.

“Pastor Mike knew at the age of 21 that he had a calling,” a press release from the church says. “He said he felt God drawing nearer to him.”

Pastor Wilder is also a member of the Ministerial Association.

He said he discovered that The Baptist Church in Tuscola through colleagues Pastor Rutledge from Arthur Southern Baptist and Pastor Faulkner from Atwood Baptist Church, who told him there was a great need locally.

“There was a true God sighting that day when he interviewed with us because we knew right then he was the perfect fit for us,” the release says. When asked what about his goals at the church he said, “to love the congregation, to motivate, to encourage, and to increase the number of attendances.”

“We have seen a great decline in attendance in most of our churches in our community and we need to get back to God, Family, and helping one another,” the release says.

For VG’s Jane Faust, it’s all about the team…and the kids