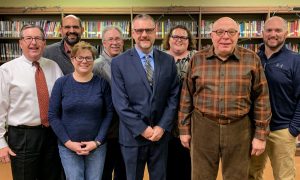 By Kayleigh Rahn
The Tuscola Board of Education during its meeting Monday, Dec. 17 hired Gary Alexander as the next superintendent of Tuscola schools.

Alexander is a 1989 TCHS graduate and says he’s happy for the opportunity to bring his family to Tuscola.

“He started his career in education with the Abingdon school district as a teacher and coach for grades 7-12,” the release says. “From there he was with the Arthur school district for 14 years as s teacher, coach, and finishing as principal of all grade levels. For the past seven years Alexander has been the Superintendent of Schools for the Pawnee school district.”

Alexander and his wife Kristi, an Arthur native, have two grown children and two children at home.

The board of education received 29 applications for the vacancy created by current Superintendent Michael Smith, who announce earlier this year that he would be leaving his post at the end of the current contract cycle.

“We are certainly excited to have Mr. Alexander lead our school district into the future,” board president Khristi Boyer said.

“A reception will be held in the near future fro the staff of the school district and the public to come out and officially meet and greet the Alexanders,” the release says

In other business, High School Principal Steve Fiscus shared details of recent meetings regarding the math and science departments and new course offerings in the coming years.

The TCHS math department met, and Fiscus said that one of the concerns from the new teachers is sequencing of courses, possible placement tests, and increasing academic rigor.

The full story can be found in the Wednesday, Dec. 19 edition of The Tuscola Journal.