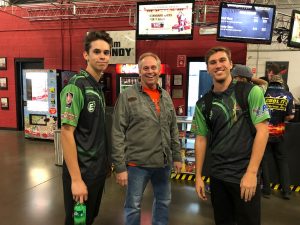 By Craig Hastings
Last week I told you I would continue on with my Las Vegas/SEMA Show vacation story. Again, the only reason I dared to venture outside my comfort zone of Douglas County was because my son Payton and his friend Noah Woods were competing in an engine build off at the SEMA Show with 50 other college teams. Las Vegas has changed way too much for me over the past 20-plus years. I don’t enjoy it as much as I did in the late 80’s. Anyway, because the boys weren’t allowed to venture off with their parents at any time I tried to shadow some of the extra curricular activities they were doing away from the SEMA Show. I did get to spend a lot of time with them wondering through acres of the SEMA participants displays along with drooling over the well over 100 custom car builds. A few of these builders/artists had a half-million dollars invested in their custom creations. Truly a fabulous sight to be seen even if you’re not someone into the whole car crazy addiction…like me.

Wednesday night the Parkland College crew decided to go racing; legally racing. Payton told me they would be loading up around 7:30 p.m. and traveling to a place called “Pole Position.” They had already raced at a track, I believe, on Tuesday night where they competed indoors in gas powered go carts. Shannon and I missed that outing due to intense feelings of being worn out beyond able to walk so while the boys raced, we sat in our room and debated over who hurt the worst.

Because I didn’t feel the need to rent a car because parking anywhere around the SEMA/Convention Center was an improbable ability, Shannon and I took a cab everywhere. Forewarning, just getting in a cab, figure on a minimum $20 per ride. And because “Pole Position” cart racing was outside of inner Las Vegas, about 20 minutes from the Bellagio Motel near Lake Mead, the trip cost me $45 one way. This cab driver right away began to tell Shannon and me his entire life story. He had us as his captive audience so we had to endure 20 minutes of constant rage complaining. Mostly the same ol’ same ol’, ex wives and little income. I’ll admit that some of his “I’ll give you an example” remarks were hilarious. It reminds me to think hard before complaining about some of my own hiccups in life after listening to this guy’s ongoing saga of poor choices.

After we arrived at “Pole Position” I felt a need to ask this cab driver, due to the SEMA Show demand on cab services, how long might I expect to wait on a cab to get back to the Bellagio from this indoor racetrack. He promptly, without hesitation, said to me, “An hour or more.” You see, this would be a long drive for a cab driver to make one way without a paying occupant. At least 20 minutes of wasted time and fuel just to get to the fare, Shannon and me. Seems how this is Las Vegas and most everything is negotiable as long as a person has something other than plastic in their pockets; we negotiated. You know what I mean, legal tender that leaves no accountable paper trail leading from the payer back to the payee! This is part of Las Vegas that will never change!

The driver knew from experience that it would take about an hour to an hour and a half to run our two races. Our negotiation included the time he would wait per minute, money down up front, so much off that per minute price if we were there more than an hour and a half, and how much of the up front money would be deducted from the final destination time. We struck a deal, the boys arrived and in we went. We would be racing electric go-carts capable of speeds as high as 55 mph. The track consisted of twists and turns with just one straightaway that was the length of the track as a whole. I had never done this, but I was anxious to get started.

I watched two heats before our own and after seeing how fast these cars run I decided I would need to talk to Shannon about how to conduct herself on the track. “Shannon, these cars are fast, and you’re going to get bumped by other cars. Don’t scream like a baby and don’t yell out loud when you get hit. Don’t embarrass me when these guys crash into you by swearing at them, please. Just get in your car and drive around the track maybe on the outer most side.” She responded back to me with a barrage of that swearing I was talking about and ended it by telling me to worry about myself and not to tell her how to drive. Shannon was the only female driver in this entire building, so I was just trying to set her up so not to be embarrassed by the rest of us.

Oh boy, in heat one I crashed into the wall hard enough to stick my car in one of the very heavy and connected to the rest of, plastic barrier wall blocks! The track guys had to come lift my car up and off of the block! Now who’s embarrassed. Shannon waved at me as she passed me. Note: when any car crashes into a wall or another car the track officials can and do remotely shut all the cars on the track down to a crawl until such time the yellow flag issue is corrected. Soon we were racing again, and I finished last…..behind Shannon who finished like fifth! We were running ten cars in the first race and nine cars the second race. Fortunately for me, Shannon was wasting a few of the other Parkland guys too, not just me! Of course, I say this because, I’m trying not to look like a rookie.

On to race number two. We’re off and guess who hit the wall; Shannon did! Yee haw this is great I’m thinking to myself. Her turn to finish last. We will at least be even when we get back to the motel and talk about tonight. Toward the end of this second race Shannon did drive past me and as she did she did something with her hand, but it wasn’t a wave this time. Hmmm, really Shannon! All eyes were already on her because she was the only girl racing with all these guys. The race results light up on the board and I see “HASINGS 6”. Oh well, I thought this was better than last place like the first race right? NO! Not right. The finish board has “DENNIS 2”.

That can’t be right! Shannon crashed early in the race so she had to be last! By now the Parkland guys are laughing their butts off at me, because Shannon finished second this last race again ahead of me! But wait, if she finished second she must have beaten a majority of these young big shot Top Guns, too. It wasn’t until I started to protest the results that I learned that weren’t racing against each other. We were racing against the clock! So even though Shannon hit the wall on her first lap, it didn’t matter as long as she drove hard and fast the rest of the laps we were allowed in our given track time. The finish board results are determined by which car had the fastest time in any one given lap, not the entire race! This wasn’t really a race pitting cars against cars. It was every car for him/her self.

So while I was just making sure to finish position wise ahead of Shannon she was tearing around the track no holds barred, get out of her way or else, to finish with a good lap time, I’m doing “Driving Miss Daisy” laps, because I know I’m ahead of Shannon; which I really wasn’t! In the final tally, Shannon had bested my best lap time by a full second which included the lap times from the first race. In my embarrassment defense, Shannon had bested the Parkland Auto Tech Class instructor! He was struggling a bit with the results himself. As a matter of fact, I heard excuses from the class like, “Oh she weighs less than us,” “Well if I hadn’t gotten stuck behind such and such I would have blah , blah, blah,” “If such and such hadn’t hit me on my best lap I would have surely blah, blah, blah.” Stop, stop everybody! I like it less than any of you, but the bottom line is she out drove all of us that finished behind her.

What I’m going to tell you now is the absolute truth! The first three people I told when we got home all said the very same thing in response. “Well I’m not surprised one bit! How you race those electric go-carts is exactly how she drives her own car everyday in her day-to-day travels!” And that my friends is why when we’re in the same car together I drive! Shannon missed her calling. She should have gotten together with Danica Patrick and headed off for a career in Indy cars or NASCAR. Just think; I could be sitting in air conditioned luxury boxes sipping on my Coors Light watching her race, doing all the work, making all the money, and immediately following the race I would be driving off in my newest Lamborghini Aventador. I’d pick her up at the racers’ locker room and drive off in search of the best steak house in town and charge it all on her credit card! Aahhh, life would indeed be perfect!