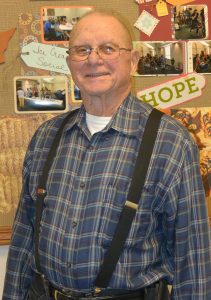 The Illinois Department of Veterans’ Affairs and the Illinois Bicentennial Office announced the recipients of Bicentennial HONOR 200, honoring the work of 200 veterans who continue to make extraordinary contributions to the people of Illinois.

Selected as one of the 200 veterans is Tuscola’s Arleigh Jones, an Army veteran.

He was nominated for the recognition by Pat Damler, of Tuscola.

“This award has very special meaning,” according to the guidelines of the nomination. “It provides our state with an opportunity to showcase the value of community service as exemplified by our Illinois veterans. Through the past experiences, they’ve embodied his virtue to the greatest extent. Whether it be service to one’s country, one’s family, friends, neighbors or community, the example set by our veterans illustrates how far individuals are willing to go to help their fellow citizens.”

“America is the greatest nation on earth because of the sacrifice of our veterans,” said Gov. Bruce Rauner. “We are proud to honor these 200 men and women as part of our Bicentennial celebration. Their service didn’t stop when they took off their uniforms. They continue to be heroes among us by going above and beyond the call of duty to take care of the people in their communities.”

“The Bicentennial HONOR 200 campaign is one of the most important commemorations of the yearlong Bicentennial Celebration,” said Stuart Layne, Executive Director of the Bicentennial Commission. “These 200 Illinois veterans truly make us Illinois Proud.”

All the Honor 200 recipients have been invited to attend the state’s official 200th birthday celebration at the United Center in Chicago on Dec. 3, 2018.

“Honor 200 provides us with an opportunity to showcase our veterans and the values they have when it comes to serving our communities,” said IDVA Director Stephen Curda, Ph.D.

The recipients represent more than 50 counties across the state of Illinois. Nominees were evaluated based on their achievements, and on the extent to which their contributions have aided, benefited and provided inspiration to their community at large. In addition, nominees must have received an honorable discharge from the U.S. military and reside in Illinois.

The full story can be found in the Wednesday, Nov. 21 edition of The Tuscola Journal.