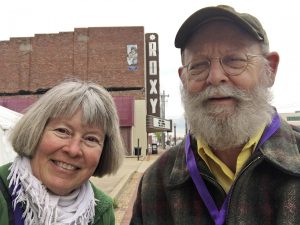 Local filmmakers, photographers and monarch butterfly conservationists Cindy and Kirby Pringle’s documentary film has been accepted into the Route 66 Film Festival in Springfield.

The Pringles’ film, “A Landscape for Life,” was accepted in the “Made in Illinois” category and will be shown Saturday, Nov. 3, in the late morning screenings. The documentary is one of only 28 films to be accepted into the film festival. Screenings will take place at the Capital City Bar & Grill, 3145 South Dirksen Parkway, Springfield.

The 30-minute film shows how planting and creating native tallgrass habitat — especially wildflowers — can boost the population of pollinators and grassland birds. The monarch butterfly population, for example, has fallen 90 percent over the last 20 years. Re-creating patches — both large and small — of the tallgrass prairie ecosystem will not only boost the population of monarchs, but other species also in decline.

“We finished two documentary films in early 2018, ‘A Landscape for Life’ and ‘Touched by a Butterfly.’ I did most of the work on ‘A Landscape for Life,’ while Cindy worked on ‘Touched by a Butterfly’ which was a very personal film for her,” Kirby Pringle said. “Her film shows butterflies as symbols of hope and joy, and she entered several film festivals and was up for ‘Best Short Documentary’ at the Bare Bones Film Festival at Muskogee, Okla., earlier this year and was also accepted into the International Christian Film Festival in Florida.

“I decided to only enter one film festival and wanted it to be local just because we don’t have a lot of available travel time this year. I’m thrilled to get into the only film festival I entered and it feels great to be batting a thousand,” Pringle added.

Pringle also recently uploaded the film to the couple’s Dogtown Artworks YouTube channel and acceptance into the Route 66 Film Festival also marks a push to become full-time filmmakers with the focus on nature and conservation.

“We’ve only been part-time filmmakers up to this point. Much of our time has been split between our ‘dog people’ artwork, raising and releasing monarch butterflies with the Butterfly Nursery at the Jarman Center and then doing our part-time jobs,” added Pringle, who  manages the Vault Art Gallery in downtown Tuscola, while Cindy works at the Jarman Center.

“We have slowly shifted away from the ‘dog people’ artwork — creating dogs with humanlike qualities — and toward environmental education and presentations over the last few years, with the emphasis on trying to help boost the population of monarchs and other pollinators, along with grassland birds and other animals of the tallgrass prairie,” Pringle said.

“Obviously we’ll never get back the 170 million acres of the tallgrass prairie, which was the last ecosystem to form in North America and the first to be obliterated. But what we are trying to show is that even by planting backyard pollinator gardens and not mowing roadsides and filter strips can make a huge difference boosting the populations of pollinators and other animals of the prairie landscape,” he added.

The Pringles travel around Illinois and other Midwestern states as time allows to show their films and talk about monarch butterflies, and how putting back pieces of the native habitat can increase the population of pollinators. Bees, moths and butterflies are keystone insects and 70 percent of all plants depend on them in order to produce the nuts, fruits and vegetables that help sustain life on the planet.

“We are working on more documentary films, we’ll be doing more presentations and travel,” Pringle said. “We’ve already made a difference in monarch butterfly groups and organizations forming in the Midwest. More people are planting native nectar plants. We have a new environmental education website almost finished and we feel like education is an area where we can have a lasting impact.”