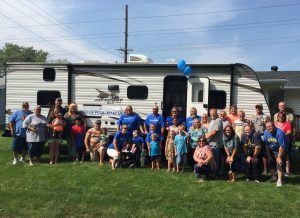 Erin Taylor has spent most of her life within the walls of her neatly organized home and when she isn’t at home she is likely heading out to a doctor’s appointment.

She was diagnosed with Down Syndrome at birth and at four months old she became very ill.

In November 2015 she became very ill.

“That was one of her biggest ones,” Autumn said. Erin was “life flighted” to Peoria where she remained on extracorporeal membrane oxygenation (ECMO) for eight days.

“They decided the only way she could hope to survive and hope to wake up and see where she was at was by placing a (tracheostomy tube),” the mother recalled. “We were in the hospital for another seven months and then sent home.”

Erin was born with a heart condition, so pulse oximetry was something the family was used to, which included an oxygen machine; however, what came home with the trach was a whole different set of challenges.

“You have suctioning and a ventilator and then the oxygen and the pulse ox, the trach changes and all the equipment to do the trach changes,” Autumn listed. “She has (gastrostomy) tube that she got when she was about 1 month old and a feeding pump… There is just so much that goes with her. Even when you are just going to the doctor’s appointment most of that stuff goes with you. Doing it on a daily basis for certain appointments is rough enough, but leaving the house and all your comforts of your exact location of everything is really hard.”

However, despite her medical hiccups, Erin is still a young girl who, like her sister Savannah, deserves to leave the house for a reason other than for an appointment.

The Taylors are in lock down mode during flu season. Erin only leaves the house when necessary in an effort to prevent contact with germs that could lead to another hospital stay.

The full story can be found in the Wednesday, Sept. 5 edition of The Tuscola Journal.