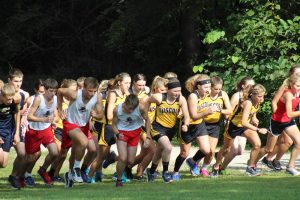 Photo: Kent Stock
The Tuscola girls’ cross country team is pictured at start of the first meet of the season at Sullivan’s Tabor Park on Thursday, Aug. 23.

By Lenny Sementi
Head cross country Coach Dustin Dees’ squad flexed their muscles in the season opener upending perennial power Teutopolis and three other schools at Sullivan’s Tabor Park. The Warriors started off their 2018 season like they ended in ’17 – with a pack mentality securing three spots in the top ten and five in the top 13. The tight-knit group ended the day with 39 points overall, 23 points better than T-Town.

Senior JD Barrett took fourth overall leading the way for Tuscola’s boys’ cross-country team in the season opener ending up in third overall out of more than 40 runners by crossing the line in just under 18 minutes with a 17:59 on the tough three-mile course. Classmate Noah Woods was next to enter the chute one spot back in fifth, edging junior teammate Mason Day at the line with an 18:54.

Jake Dyer was the number four ending up a few seconds out of the top ten taking 11th overall. Logan Wallace was the last Warrior to score for the team with a 13th place effort posting a 19:52. Nicolas Woods served as the alternate ending the day with a 21:20. Also touring the course were the Middleton brothers Jordan and Jacob, Tanner Campbell, Caleb Haste, Riley Nolan and Liam Rainey.

Brynn Tabeling led the Lady Warriors to a third place finish in the event. The sophomore was less than a minute off the pace of the leader rounding the three-mile course in 22:56. Fourth-year runner Ashton Smith was Coach Dees’ number two, ending up just outside the top ten taking 11th at 25:05. Kenzi Heckler was the third scorer with a 13th place finish ending up one spot in front of Hannah Hornaday who edged Faithlynn Daugherty at the line to end the scoring.

Hannah Lemay was just a few ticks behind and landed in the top half of the field as the Warriors’ alternate in 17th overall. Running for the Warriors’ JV were Kyla Gough, Abby Jacob, Emily Kemp, Jackie Watson and Samantha Simpson.

The Warriors have a big week in front of them with a showdown against the always strong Sages in Monticello at Little Galilee in a quad meet on Tuesday before traveling to Chrisman for the Cow Chip Classic on Saturday.