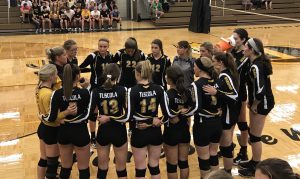 By Lenny Sementi
Maddie Green shined in the Tuscola volleyball season opener Monday, Aug. 20 helping coach Lydia Millers’ squad to their first win of the year upending a scrappy Cerro Gordo squad in a two game sweep 25-23, 25-19. The Lady Warriors ran out to an early lead in both games against a top ten ranked team in The News-Gazette then survived Bronco runs sealing the deal on the non-conference victory moving to 1-0 on the year.

Green delivered a well-rounded stat line leading the way with four digs, three kills and 19 assists. Funneling the ball to the Warrior setter was the libero Natalie Bates. Bates was tops in the save department with six, while adding two kills and an ace to her early season resume. The senior tallied the first six points of the year at the service line setting the tone early.

Sisters Karli and Katie Dean were the go to hitters up front combining for 11 kills in the contest. Karli was also a force on defense blocking five balls at the net for points. Kyra Moyer, Kendyl Ring, Ashton Smith, and Sydney Watson all came up big on defense combining for 12 saves, Moyer led the way with five of her own.

Bates opened up game one at the service line and kick started the season in style holding serve for the first six points of the contest and the season including one ace. Karli Dean delivered a kill during the run and another to kick start a four-point run that put Tuscola up 12-4. McKinlee Miller followed another Dean kill with a three point service run as the Warriors doubled the Broncos score moving in front by ten 20-10. Cerro Gordo fired back with a seven-point run and then a five-point run to knot the game at 22’s. Enter the younger Dean, Katie and a big kill to put the Warriors in front for good ending the game how it started with a Bates service point making it 25-23.

Lexie Russo showed up in game two accounting for all five of her kills in the second skirmish including three in the first five points of the set, helping Tuscola to a 5-1 advantage. Green found some success at the service line fueling a five-point run highlighted by a big kill by Miller as the Warriors ran out to a 10-3 lead. Cerro Gordo fired back just like game one cutting the lead to one with back-to-back five-point swings. Though, it was not enough as the Warriors rode the arm of Russo at the net and Karli Dean at the service line to open up a six-point lead they would never relinquish sealing the deal on the match with a 25-19 set two victory.

The full story can be found in the Wednesday, Aug. 29 edition of The Tuscola Journal.