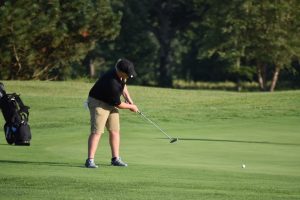 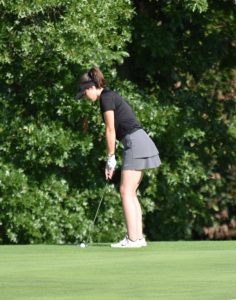 By Lenny Sementi
Mathew Erickson and Claire Ring came out firing in Tuscola’s golf team’s first match. The two returning letter winners from a year ago collected both the boys’ and the girls’ medalist honors in a meet Thursday, Aug. 16 against Meridian at Mowequa Country Club.

Erickson led the way for Coach Doug Bauer’s boys’ squad firing a 43 and capturing the top spot by two strokes. Erickson’s efforts were not enough to seal the deal on a team win for the Warriors over their Central Illinois Conference brethren as they fell to the Hawks by 15 strokes, shooting a 234.

Next up was Tyler Bialeschki who ended his round of the new season in 52 strokes. Coulson Poffenberger was the Warriors’ third scorer while Landon Banta was the fourth. Cory Dunn toured the course as the alternate punctuating the first outing of the year.

Ring was tops for Tuscola from the girls’ tees leading the way with a 43. The junior pared two holes and birdied the seventh hole outdistancing her nearest competition by more than 15 strokes. Laney Banta and Whitney Root were next up as the Warriors swept the top three spots to kick off the season with style.