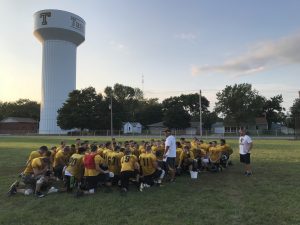 By Lenny Sementi
Tuscola’s head football coach Andy Romine shakes his head every time someone asks him, “How are you going to replace last years’ seniors?”

Then he grins and states, “There was a program in place before last year and there will still be one here next year when this group moves along. Are they missed? Of course, but it’s a system built in the weight room, and we take pride in the next man up being ready and doing the job.”

Sometimes it’s one player stepping up, and sometimes it takes two to fill the void, but Romine always seems to have a core of strong players returning to build a foundation for those who are new to varsity football. And since everything starts on the line, coach Romine and O-line coach Ted Minger are glad that Cade Morgan, CJ Picazo, and Braydon VonLanken all return to the offensive line this season. The three seniors were part of a group that ran rough shod over its opponents to the tune of 2,829 yards and allowed just seven sacks in 14 games a year ago.

There’s a trio of players vying for the final two spots during training camp. Sophomore Micheal Coldaron seems to have separated himself and taken control of right tackle, and junior Caden Cradle seems to be a step in front of classmate Max Wyninger, but any of the three are great options for the fourth-year coach that boasts a 34-3 record and back-to-back-to-back unbeaten Central Illinois Conference Championships since taking over the program in 2015.

Other pieces to the puzzle that are already in place on the offensive side of the ball are Luke Sluder at quarterback, as well as Cade Kresin and Haden Cothron at wideouts. Sluder was extremely productive behind the center in his first year at the helm in 2017. He averaged 153 yards per game delivering 2,148 yards on the season while firing 25 TD passes and just 10 interceptions, while rushing for a team leading 935 yards and 15 touchdowns. Kresin is his top returning target from the state runner-up squad grabbing 13 balls for 174 yards. Cothron hauled in eight catches in an injury laden junior campaign for 111 yards.

The full story can be found in the Wednesday, Aug. 22 edition of The Tuscola Journal.