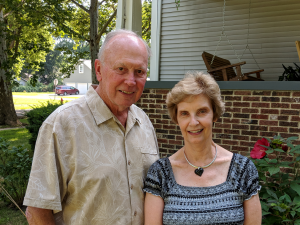 On July 14, Jim and Dorothy Voyles celebrated their 45th wedding anniversary with a family dinner and later a family trip to the Finger Lakes region of central New York. They were married in Williamsville, N.Y., in 1973 after meeting at Western Illinois University in graduate school.

Dorothy is a retired professor of English at Parkland College, and she also served as Chairperson of the English and Humanities department at retirement. She also worked at Olney Central College and upon moving to Tuscola as an aide to then Congressman Terry Bruce. She is currently president of the Tuscola Library Board.

Jim served as Tuscola High School principal for four years and then Superintendent of Schools for 16 years until his retirement. He was also an administrator in Olney and Chair of the English department at Stephen Decatur High School along with coaching football, basketball, and baseball. He currently serves as a member of the Board of Trustees of Parkland College.