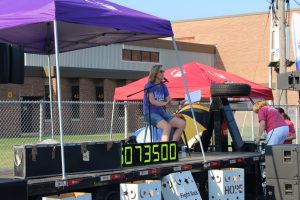 By Kayleigh Rahn
“‘Is she still alive?’”

“Imagine someone inquiring about your wellbeing using those words,” said Angie Little from the main stage at Douglas County Relay for Life.

“‘Is she still alive?’ A year ago that question was genuinely asked about me.”

The Arcola resident has completed her second year of Relay for Life, but when she was asked to give the survivor speech this year she said she was honored but hesitant to accept.

“When you hear the term survivor most people think of someone who is at the end of their cancer journey,” she said. “Someone who is cancer free and finished with their treatments. Well that doesn’t apply to me.”

Little is a Stage IV lung cancer patient, living and surviving with cancer.

“Sometimes on good days I might even say I am thriving considering the circumstance,” she said. “My relationship with cancer is far from over, and from what I’m told it probably never will be.”

In February of 2015 Little says her world was shifted when, a few days after her 48th birthday, her hand happened to brush over a small lump near her collar bone.

“I was shaken by how odd it was, and I followed my gut instinct to have it immediately checked out. I’m so grateful that I did not ignore that lump and I listened to that instinctive whisper in my ear.”

Within 20 minutes of discovery, Little was at a walk-in clinic. Nothing was done for her that day, but she was encouraged to follow up with her primary physician, which she did two days later. A chest X-ray was ordered and a suspicious spot was found on her right lung. She then had a CAT scan followed by a PET scan and finally a biopsy.

Within two weeks she had the diagnosis–Stage IV lung cancer, non-small cell carcinoma. One long primary tumor spread to the lymph nodes of her chest and neck.

“I couldn’t have been more shocked,” she said. “I was a non-smoker, exercise fanatic who ate right most of the time. I had no symptoms except for fatigue, but who isn’t tired?”

She asked her doctor for a prognosis.
The full story can be found in the Wednesday, June 20 edition of The Tuscola Journal.