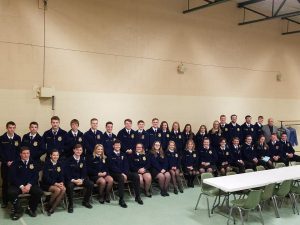 Thursday, May 3 the Tuscola FFA Chapter attended National Day of Prayer at the Forty Martyrs in Tuscola. More than 30 members were dressed in official dress to be present at this event. FFA members helped serve lunch and clean-up.

Student Council had State Convention in Springfield where Sydney Hoel brought the Honor Council book, which they won a plaque for; JD Barrett presented an idea board over our collection for a high school in Texas that was affected by the hurricane, which he received the Pillar Award for Dedication; Sabrina Alcorn led a discussion group over Student Council participation; and Whitney Root made a donation. Those students, Sydney, JD, Sabrina, and Whitney were Honor Delegates. Kelsey Slaughter, Emma Zimmer, Emily, Kemp, Justine Kauffman, Dillan Alcorn, and Gabby Gunther were all regular delegates. Tuscola Student Council was also recognized as an Honor Council Winner and the Kickapoo District was awarded the number one Student Council District in Illinois!

Friday, May 11 FFA had Ag Outside the Classroom in the East Prairie parking lot. There were East Prairie and North Ward students, as well as several children from area preschools that came out to see the dogs, chickens, goats, pigs, cattle, a duck, a horse, a bunny, and the tractors.

Monday, May 14 SADD had their last meeting of the year during which they reviewed the year’s accomplishments and prepared for next year. Leadership team applications were due at the end of the day. FCCLA had officer interviews for the 2018-2019 school year during lunch as well.