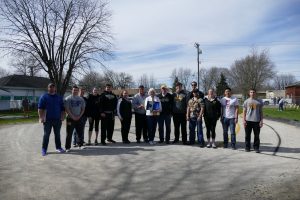 Submitted photo
Mike and Linda Damler are surrounded by the TCHS throws team, coaches, and alumni after Mr. Damler was presented with a plaque recognizing his 27 year of service to the program.

By Lenny Sementi
Head boys’ track coach Ryan Hornaday, who has built the Warriors into a perennial state-ranked team, has seen a lot of records go by the wayside since taking over the reins of the Warriors. This past Friday at the 32nd Annual Tuscola Invite he witnessed one that won’t be topped anytime soon. Hunter Woodard not only broke the shot put record set by Jeff Hettinger a quarter century ago, he shattered it eclipsing the mark by nearly three feet.

Damler, who witnessed both Hettinger’s throw 25 years ago and Woodard’s, was recognized for his 27 years of service during the event. Wienke was at both tosses, as well, coaching both athletes, of which, are just two of his 37 state champions inked on his throws coach resume.

The protégé, Woodard, also won the discus with a toss of 146-feet 5-inches collecting 20 of the Warriors’ 88.5-team points leading them to a dominating 20-point Invite victory over a good Arthur squad. CJ Picaso, another Weinke disciple, donated to the team victory as well, taking sixth in the shot (43’) and third in the discus (125’) adding seven points to the team total. Rounding out the field events were Haden Cothron and Dalton Hoel. The cousins took fourth and fifth, respectively, in the long jump with leaps of 19’ 2” and 19’1”.

John Hill led the way in the open runs. The speedy senior set a personal record while winning the 400 meter with a time of 52.4-seconds. Woods was near the front in the 100 taking fourth with a time of 11.67. Jacob Kibler accounted for two points with a fifth place finish in the 110-meter high hurdles with a time of 17.72. JD Barrett was just steps outside scoring positions in both the 1600 and the 3200-meter distance runs setting personal records in both posting a 5:15 and a 10:46.

The full story can be found in the Wednesday, April 25 edition of The Tuscola Journal.