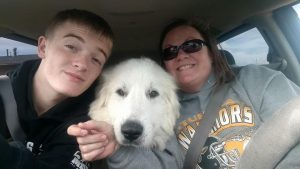 By Kayleigh Rahn
Precious cargo is transported up Interstate 57 nearly every day, mostly unbeknownst to passersby. A steady number of motorists pass by Tuscola daily on a northbound mission with four-legged, furry passengers in tow.

Tuscola’s Jennifer Willoughby Russell is one of dozens of area drivers who volunteer for regional pet transport groups that work to move animals from high-kill shelters of the south to rescue shelters located throughout the Midwest.

Jennifer has worked for more than a year with three transport organizations. However, the gig started as a service project charged to her teenage son, Gage.

“Gage had to do a community service project for his Confirmation at Forty Martyrs Catholic Church,” she said. “Ten hours had to be with the church and then 10 hours had to be working with an organization. I had known a few people over the years who did transporting for some different places, and I thought let’s do it.”

The three organizations the family has worked for include Mobile Mutts of Champaign, Angel Paws of Tennessee, and Illinois Transport, a resource group.

As for Mobile Mutts, it’s a volunteer-based rescue transport group of animal rights advocates who transport dogs from high-kill shelters in the south to the safety of screened and approved foster based rescues throughout the Midwest, according to its website.

“Mobile Mutts volunteers drive year round and weather permitting from Cordele, Georgia and head up through Nashville, Louisville, Indianapolis, Champaign and Chicago in Illinois, Madison and Eau Claire in Wisconsin and end in the Minneapolis, Minn. area,” the website says. “Rescue transports are a leg-to-leg, ground relay transport, much like the old ‘pony express’. We like to call it the ‘Underdog Railway.’”

The full story can be found in the Wednesday, April 4 edition of The Tuscola Journal.