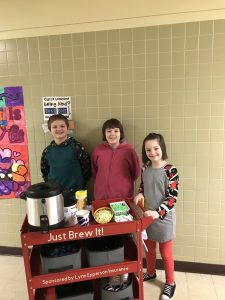 By Kayleigh Rahn
Come Friday morning sixth graders Bri and Lucas can be found serving up the best-brewed coffees and teas throughout the halls of East Prairie Middle School.

Since February, Ashley Wishard’s special education students have taken on the Brew Cart with pride by taking orders and making deliveries throughout the school.

The idea for the project came to Wishard as a way to tie several areas of her curriculum together, she noted. The 75-cent warm beverage delivery requires social skills, math skills, and leadership skills to be successful.

“The students are charged with counting the money and making the change,” Wishard said. “They have to clean up the supplies after; they are also working on their communication skills by talking to teachers they wouldn’t interact with normally. They have to introduce themselves and have that conversation. With the conversation skills they are starting to remember certain orders, since many of the teachers order the same thing each week. They are getting used to different areas of the building as well.”

Through most of the day these students are in a self-contained classroom this project allows them to become familiar with the rest of the building, which come in handy as they move to a new classroom in a new hallway for seventh grade next year.

“I think it’s a good experience for next year to get to know all the teachers,” Lucas said.

“Lucas, who is a football player, thought it was a big deal to deliver coffee to Coach (Andy) Romine (who teaches PE and health at the middle school),” Wishard said.

On holidays the students will write fun cards or, for example, on St. Patrick’s Day they wrote jokes for each of the teachers.

“The teachers get to know them, too, and their different personalities and their different traits,” Wishard said. “The other kids think it’s neat. They see them getting to deliver coffee to the teachers and they want to do it, too. So this is kind of way for them to have a privilege and a task to be proud of doing.”