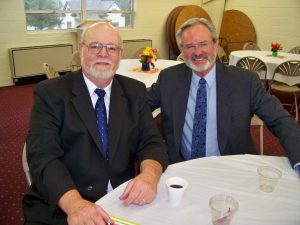 Rev. Jerry Silver will give his last sermon as senior pastor of First Baptist Church, Tuscola, on Easter Sunday. A resident of Georgetown, his life as pastor, author, father, grandfather, son and brother is about to take a new turn.

“It’s going to be a new adventure,” Silver told his congregation.

Pastor Silver is not retiring from serving the Lord. He will be assisting his son-in-law, Pastor Ted Clarke, in building the Raddison Road Baptist Church in the Minneapolis/St. Paul, Minnesota area. He will also be putting the finishing touches on a book entitled, “Touchdown in the Dark.” The book tells the story of his battle with racial bigots who feigned Christianity during his ministry in Oaklawn. The book is scheduled to be released in December of 2018. Silver’s daughter Carla, who lives in Florida, is assisting with the final editing and technical issues.

He has served as senior pastor of First Baptist Church, Tuscola, since 2005. In a letter to the congregation in March, Pastor Silver stated, “Though our church family didn’t grow the way I would have liked, we’ve seen boys and girls saved in VBS, adults saved and baptized, and couples married. We’ve shared sad times when we had to say goodbye to friends Mildred Bryant, Bill Daniels, Pete King, Hop and Nancy Conner, Betty Ray, Lyle and Lola Mae Smith, John Winkler, Betty Carroll, Margaret Cox, and Jean Aldridge. We’ve shared great days like America Sunday, Old Fashioned Sunday, and all the beautiful, sweet Easter and Candlelight Services. There were great family times like our Valentine’s Day dinners with some wonderful speakers, fun games and special music; our annual New Year’s Eve ‘Price is Right’ game; and movie nights. I hope that each one of you will hold all of these memories as fondly as I do.”

Pastor Silver is a son of Rev. William Raymond Silver (1930-2017) and Joan Silver of Georgetown. He is the brother of Mike (Emma) Silver of Tuscola, Janet (David) Stein of Yorktown, Ind., and the late Rev. Rodney Silver, who died in Bolingbrook in 2000. His move to Minnesota will give him the opportunity to spend more time with his daughter Ginger, son-in-law Ted, and his four grandchildren. His son Chad (Jennifer) Silver lives in California.

His son-in-law Reverend Clarke will be installed as senior pastor of Radisson Road Baptist Church on May 6, and Pastor Silver will be in attendance there. He will also be helping the Clarkes move from International Falls to the St. Paul/Minneapolis community. Until then he plans to be available to the congregation of First Baptist Church in Tuscola if needed and will continue to care for his mother prior to his move to Minnesota.

Pastor Jerry Silver’s care for his congregation in Tuscola went beyond weekly sermons. He climbed ladders to repair the roof of a church member, helped congregates move into new homes in and out-of-state, did maintenance work on the church, volunteered at church camps, shared gospel tracts with thousands, encouraged the financial support of the ministry of Jun and Cecile Yague in the Philippines, and continued his Christian ministry by expressing his love for the Lord through his kind actions and words every day. A farewell dinner and celebration of the pending release of his new book will be held by the congregate of First Baptist Church Tuscola prior to Pastor Silver’s move to Minnesota later this Spring.

Sparks in the Park 2022 schedule