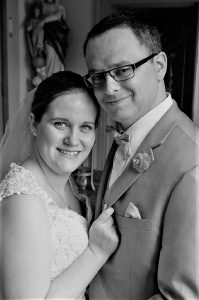 The Rev. Angel Sierra of Tuscola officiated and a reception followed at The Hilton Hotel in downtown Omaha.

The bride wore a blush A-line gown, and the groom wore a charcoal tailored tux.

Flower girl was Joelle Murphy, niece of the bride from Omaha.

Ring bearer was Grayson Kleiss, cousin of groom from Tuscola.

The new Mrs. Kleiss is the daughter of E.J. and Pat Murphy of Omaha. She is a 2007 graduate of Millard South High School, Omaha, and attended the University of Nebraska, Omaha.

She works as a License and Title Manager at Worden-Martin in Savoy.

The bridegroom is the son of Jim Kleiss and Debbie Kleiss of Tuscola. He is a 2002 graduate of Tuscola Community High School and a 2006 Finance graduate of Eastern Illinois University, Charleston, and received his MBA in 2016 from Louisiana State University, Shreveport.

He works as a Financial Advisor with Edward Jones in Arthur.

The couple are at home in Tuscola.