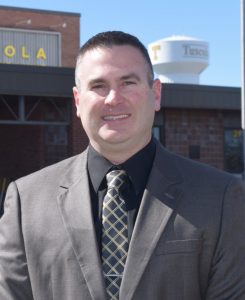 Fiscus will replace outgoing principal Brad Allen who, after seven at TCHS, has taken a new role as principal of Prairie Central High School.

Fiscus will make the transition to Tuscola after 16 years with the Prairieview Ogden School District. The St. Joseph native began his career with the grade school in 2002 as the junior high science, PE, and health teacher before transitioning into the athletic director role and finally serving as assistant principal since 2009.

“Tuscola has always been a town and place I have viewed from afar as one of those places where if a job ever opened it would be something I wanted to pursue,” Fiscus said. “Community support for the schools, for academics, athletics, and all extra curricula that I have seen from the outside looking in really made it some place I wanted to be a part of. It seemed like a place where I could get my family involved and where my kids could grow up and go through school.”

Fiscus says he works with an open door policy, and he doesn’t plan to change systems that are working for the staff and students.

“I want to make sure that everything we are doing we are trying to put the kids first by meeting the students needs, whether it is academically, socially, emotionally. Provide them with any type of opportunity we can to fulfill their dreams.”

He said the ever-evolving role of technology in education will have a continued presence for TCHS.

“Anything we can to do make sure kids are knowledgeable about safe practices and how to use those tools in their future careers is something we have to make sure can provide,” he said.

Student recognition will be a piece Fiscus will bring with him from Prairieview-Ogden to Tuscola.

“I think we’ve done a great job with student recognition where I’m at, and I’ve looked at some of the initiatives Mr. Allen had created and a lot of them really match up,” he said. “It was neat for me to see. We have very similar paths. I’m going to want to continue what he’s done, then sit back and see what the teachers want and what the students to see if there are changes we want to pursue. I’m excited to see the program he has in place and tweak things if we need to.”

The full story can be found in the Wednesday, March 28 edition of The Tuscola Journal.