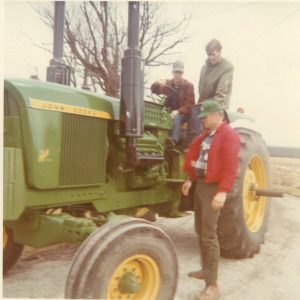 For Jerry Baird it was a machine made of iron and steel. A tool used to get the job done.

But two generations later, the hunt to return his 1968 John Deere 4520 Kinze Re-Power to the family was a quest taken on by his tireless grandson Jerrod Baird.

In 1971 the Baird family welcomed the 4520 home after it was shipped to Iowa where legendary machinist Jon Kinzenbaw overhauled the engine with the Kinze Re-Power. The job entailed replacing the original engine with a Detroit Diesel during a time when Deere was experiencing problems with engine production. Kinzenbaw worked on John Deere 5020, 4020 and 4520 tractors for farmers across America – from New York to California and Canada down to Texas, according to the Kinze website. And that included the Bairds machine.

However, the re-power created a loud engine, and locals say residents from miles around knew when Jerry Baird was heading to the field. John Baird was around 8 years old when the tractor returned to the farm, and he remembers riding the school bus home, seeing his dad in the field, and feeling proud of the mean tractor with the extreme sound.

“Everyone thought that was the coolest thing,” John recalls.

Eventually the machine was sold and left the area through a local dealership.

“I think the first time you ever mentioned something to me was at the Gordyville Tractor Pull,” Jerrod said to his dad John from their shop last month. “We were walking by a booth and saw a picture. He said ‘your grandpa had a tractor just like that.’”

Jerrod said he and his twin brother Jordon were about 15 at the time, and over the years their father had hunted periodically for that same tractor with no luck.

“I searched the internet and decided finding this thing was going to be like a needle in a haystack,” John said. He wasn’t sure where his father had traded the machine, but he had an idea that Arthur was a possibility.

“It would have been a lot easier to find this tractor if we had a serial number, but we didn’t have anything,” Jerrod said. John had previously sifted through records belonging to his mother that may have listed the tractor’s serial number.

“Unfortunately, she had thrown everything away up to about when Dad would have traded off that tractor,” John said.

The full story can be found in the Wednesday, March 7 edition of The Tuscola Journal.