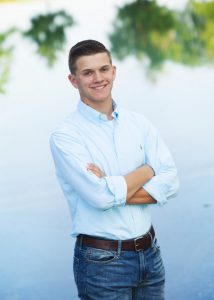 Tuscola Community High School senior Noah Pierce, son of Pat and Bobbi Pierce, has been named the January Rotary Student of the Month. Noah has earned a 3.95 GPA and is ranked eighth in his class of 72.

Noah has played football and baseball through his four years at TCHS. In his junior baseball season he was named to the Academic All-State Team, first team All-Central Illinois Conference, and most improved for his team and has been a member of the T-Club since his sophomore year.

Noah has also been involved with FFA and Future Business Leaders of America throughout his academic career. As a junior, he joined Students Against Destructive Decisions and National Honors Society and has continued his work with those clubs through his senior year.

Finally, Noah has earned perfect or excellent attendance throughout each school year to date.